Archaeologists have deciphered a grey marble slab whose 800-year-old Arabic inscription makes it the only Crusader artifact in that language ever found in the Middle East, the Israel Antiquities Authority (IAA) said Monday.

The inscription bears the name of Holy Roman Emperor Frederick II, and the date "1229 of the Incarnation of our Lord Jesus the Messiah," leading the IAA to proclaim it "a rare archaeological find." 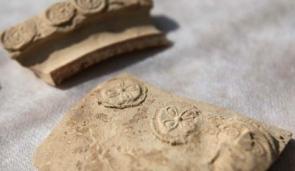 The inscription was found years ago on a wall in Jaffa, near Tel Aviv, but thought to have been from the Ottoman Period, and so not given priority by archaeologists.

Only when they began deciphering it, did they realize the inscription dated from the Crusader period of the Middle Ages, Professor Moshe Sharon, of the Hebrew University of Jerusalem, said.

Frederick II, who led the Sixth Crusade (1228-29) fortified the castle of Jaffa and left in its walls two inscriptions, one in Latin and the other in Arabic.

"The Arabic inscription was drafted by Frederick's officials, or possibly even the emperor himself, and it is the one which has been now deciphered," said Sharon, one of the two archaeologists who deciphered the inscription.

The inscription is almost completely intact. It lists all of the titles of Frederick II, and has no counterpart elsewhere. In Sicily, where Frederick's main royal palace was located, no Arabic inscription of his has been found to this date, the IAA said.

Frederick's most important achievement during his crusade was the handing over of Jerusalem to the Crusaders by the Egyptian Sultan al-Malik al-Kamil, as a result of an armistice agreement the two rulers signed in 1229.

Despite having been excommunicated by Pope Gregory IX, Frederick crowned himself King of Jerusalem in the Church of the Holy Sepulcher, and mentioned his being the "King of Jerusalem" in the inscription.