Investigations include further excavations at the famous Egyptian Gate, a search for the ancient harbor, and exploration of the ancient destruction level at the Lion Temple. 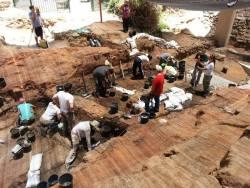 Teams of archaeologists, students and volunteers will return this month to the site of ancient Jaffa on the central coast of Israel to pick up where they left off in 2013, when they uncovered more of the sensational evidence of a fiery destruction at the site's ancientAmarna period New Kingdom Egyptian fortress gate. The continuing investigations will also include new elements -- the search for the ancient harbor complex, and excavation of evidence of a 14th century B.C. destruction layer at the remains of the site's Lion Temple.

Under the direction of project co-directors Aaron Burke, Associate Professor of the Archaeology of Ancient Israel at the University of California, Los Angeles, and Martin Peilstöcker of the Isral Antiquities Authority, one team will continue the excavations at the famous fourteenth century B.C. Egyptian fortress gate complex, where in 2013 they uncovered the stark remains of an extensive violent destruction.

Excavations in 2012 first revealed the evidence, with clues to its extent indicated when excavators discovered a commemorative scarab of Amenhotep III dated to the mid-fourteenth century B.C., found within the upper destruction layers and apparently fallen from what the archaeologists interpreted as a second story administrative office floor. A year later, in 2013, they exposed the city gate’s passageway below more than 1.5 meters of destruction debris. The finds included arrowheads, a spearhead and lead weight, decorative ivory inlays, numerous charred seeds, a number of ceramic vessels, antlers from deer, and nearly two dozen cedar timbers thought to have once made up the gate’s roof and upper story. The seeds, identified as those of barley, olive pits, grape pips, and chick peas were a welcome find, as they provide an insight to the foods consumed at the site.

The assortment of artifacts paint a picture of a city gate that functioned as something more than purely a defensive structure -- a complex that housed administrators, storerooms, and other support facilities. Speaking of the antlers, for example, Burke and Peilstöcker noted that they "suggest that the gate was not a stark and utilitarian space as many reconstructions of Egyptian gates suggest. Instead, it would seem that Egyptian soldiers hung these items within the passageway as trophies of their hunting around Jaffa."**

The timbers, the earliest and largest such ancient timbers from that time period found in Israel to date, are thought to have been used in the construction of the gate’s second story and roof. Reported Burke and Peilstöcker in a press release: "They will provide not only important chronological data such as evidence for the date of the construction of the gate complex but also will contribute to refining our understanding of the evolution of Egyptian rule in Canaan since the gate is one in a sequence of gates providing evidence for the earliest Egyptian fortress in Canaan. As important proxies for climate change, the timbers also offer a unique opportunity for an improved study of the Late Bronze Age environment."**

Burke and Peilstöcker hope to shed light on the nature of coexistence between the Egyptian occupiers and the native Canaanite inhabitants of the area. "New archaeological data combined with well-known historical texts of the Late Bronze Age are now shedding light on the nature of interactions between the Canaanite inhabitants of Jaffa and its environs and the Egyptian inhabitants of the New Kingdom fortress built atop the city’s earlier remains," reports Burke and Peilstöcker. "The resulting picture is one colored by episodes of violence and peaceful social interactions in Jaffa over a period of more than 300 years, from ca. 1460 to 1130 BC."* 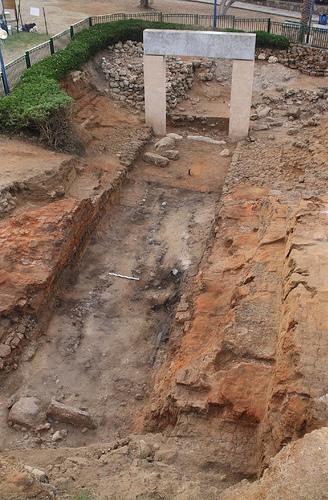 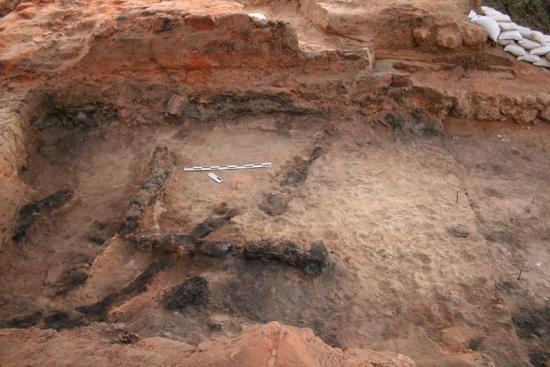 The charred remains of cedar timber/beams were encountered during the 2013 excavation.Courtesy Jaffa Cultural Heritage Project

Additional investigation at the site will entail excavation in the area of the "Lion Temple", a structure thought to exhibit characteristics of a sacred or religious nature. The structure acquired its name from the discovery of a lion skull in its southeastern corner by Jacob Kaplan during his excavations there in the early 1970's. It is thought to be a Caananite building.

The 2014 season will also see exploratory efforts under Shelley Wachsmann of Texas A&M University, whose team will be investigating the area thought to contain the remains of the ancient harbor of Jaffa. The team will use remote-sensing in a deep-water survey for ancient shipwrecks, testing the application of archaeogeophysical and geoarchaeological techniques to identify the ancient harbor. The investigation will also employ a Remotely Operated Vehicle (ROV) to verify anomalies at the 50 to 300 meter depth range that were previously detected.

More information about the Jaffa project can be obtained at the Jaffa Cultural Heritage Project website, and a detailed article about the Jaffa excavations was published in the March 2013 issue of Popular Archaeology.

The city of Jaffa has been an important port city for over 4,000 years. By the Late Bronze Age, Jaffa had become a principal port and garrison for the New Kingdom Egyptian empire. Mentioned four times in the Hebrew Bible, it was named as one of the cities given to the Hebrew Tribe of Dan(Book of Joshua 19:46), as a port-of-entry for the cedars of Lebanon for Solomon's Temple (2 Chronicles 2:16), as the place from which the prophet Jonah embarked for Tarshish (Book of Jonah1:3) and as the port-of-entry for the cedars of Lebanon that were used in the construction of the Second Temple of Jerusalem (Book of Ezra 3:7). The city is also mentioned in the ancient Egyptian Amarna letters.

The view of Jaffa from the sea (as seen in 1895). From the Detroit Publishing Company Collection, Trialsanderrors, Wikimedia Commons