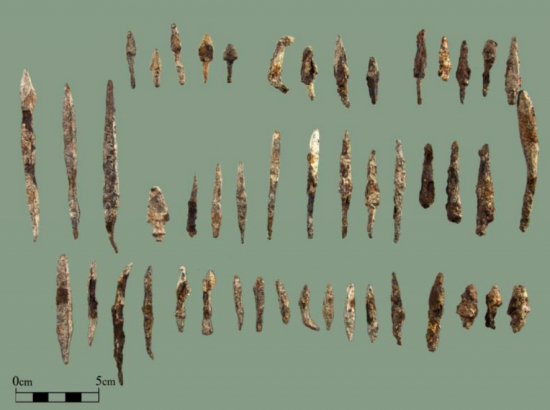 Other finds include rare coins, like a half-shekel minted in the first year of the Great Jewish Revolt against Rome in 66 CE; a seal impression left in clay, from the 6th century BCE bearing the name of a Judean official; and golden mosaic tiles from the early Islamic period which once decorated the Dome of the Rock’s exterior before it was renovated.

“Our main method of dating is via typology,” Barkay said. “We try to find parallel, similar objects found elsewhere in context” and use them to date objects found in the Temple Mount fill.

“That is one of the axiomatic assumptions of archaeology,” he explained, “that there is a fashion in human life, and objects of the same time looked similar here in the Temple Mount and elsewhere.” Unfortunately, the project presently lacks the necessary funds to perform radiocarbon dating on organic matter such as fox, cow, sheep, and pig bones to better date some of the finds.

“It is true that we are dealing with material that has no context. We do not know from what depth the material came. We do not know what was found next to what, with what structures are they associated,” Barkay said. He noted, however, that there had previously been no archaeological survey of the Temple Mount, calling it “an archaeological black hole” comprising one-sixth of the Old City.

Since King Herod built the platform surmounting the Temple Mount in the first century BCE, it has been “a closed box,” which “didn’t have large-scale earthen works carried out, so no earth was brought in and no large quantities were taken out. The soil is indigenous,” Barkay said.

Contrary to Barkay’s assertion that the Temple Mount is a “closed box,” Professor Israel Finkelstein of Tel Aviv University noted that there is no guarantee that the earth, and the items found therein, ultimately derive from Jerusalem.

“Though it is reasonable to assume that the fills come from the Temple Mount, the debris could have also been brought from other locations,” Finkelstein pointed out in an email. He nonetheless said that an “extraordinary find, such as an inscription” would be of significance, but that nothing of that magnitude has surfaced yet.

Professor Marwan Abu-Khalaf, a Palestinian archaeologist at Al-Quds University, said that the area of the al-Aqsa compound on which the Marwani Mosque was built was “a dump” that Ottoman Sultan Suleiman the Magnificent used to support the platform and seal off the Golden Gate. Abu-Khalaf has written extensively on the Islamic history of the Haram al-Sharif, as the Temple Mount is known in Arabic. He said that the fill that was removed by the Waqf had no stratigraphy, and that the earth used to close up the Golden Gate, and whatever was in that soil, may have come from the surrounding Kidron Valley.

Parrying critics, Barkay said that even if the information gleaned from sifting through rubble excavated unscientifically from the Temple Mount is incomplete, it’s better than zero. “We can have something, after all.”

Without naming names, he scathingly rebuked his detractors, scorning them for scouring the ground at ancient sites and collecting objects without excavating — a method known as surface or field surveying.

“They are those that carry out archaeological surface surveys. They collect material on the surface without any context and publish them, and publish articles on them,” Barkay said.

Hebrew University’s Professor Eilat Mazar said that even field surveys of archaeological sites contribute to our understanding of ancient sites. All the more so the investigation of fill from the Temple Mount, even if the items are not found in situ.

“It’s there. It’s from there. It belongs [to the Temple Mount], in one way or another. There’s therefore significance to everything that comes out of there,” she said during a chat at her offices on Mount Scopus. Mazar called the sifting project “exceptional” for its aim of saving what was left to be saved, whether it was Islamic or Jewish in character. The value of the statistics of what was found — and what wasn’t, and of salvaging artifacts that would have otherwise been relegated to a garbage dump — is unquestionable, she said.

Despite the City of David Foundation’s funding for the project, Barkay said the right-wing organization has no influence on the archaeology of the site.

A surreptitious visit to a lecture for Israeli schoolchildren given as part of their visit to the Temple Mount Sifting Project, however, discovered that the lecturer, an archaeology student working at the site, made no mention of Islam or Arabs, and solely emphasized the Jewish connection to the Temple Mount.

Yonathan Mizrachi, head of Emek Shaveh, a group that promotes Israeli-Palestinian coexistence through archaeology, contends that the sifting project “doesn’t have any archaeological value,” but has “a lot of impact” concerning the modern Israeli, Jewish narrative surrounding the Temple Mount.

“After one destruction you cannot do a proper excavation. That’s how it is,” Mizrachi asserted.

Mizrachi contended that even if something as revolutionary as an inscription bearing the name of Solomon and a reference to a temple were found during the course of sifting, it wouldn’t be of great value; its correlation to the site can’t be definitively ascertained. “Even this inscription would raise more questions than answers, and scientifically it has no value.”

Mizrachi’s bottom line is that “pottery without structures has very little value” out of context, and as far as he’s concerned, the objects gleaned from the Temple Mount fill lend little to the scientific understanding of the site.

Despite the controversy, Barkay remains unfazed and committed to his work. “Whatever you do, and also whatever you don’t do, in Jerusalem is political,” Barkay reflected. “Whatever is done on the Temple Mount is even more political.”