An ancient Roman theater in İzmir is unearthed after the expropriation of shanty houses, while another in Amasra is being used as a graveyard

During the destruction of expropriated shanty houses in the outskirts of İzmir’s Kadifekale neighborhood, the stage and some walls of an ancient Roman theater have been unearthed, Doğan News Agency has reported.

The İzmir Metropolitan Municipality has so far spent 11 million Turkish Liras for the expropriation of buildings around to unearth the ancient theater. Dozens of parcels have been expropriated to unearth the theater, which were stuck among the shanty houses.

While deconstruction continues on an area of 12,000 square meters where the theater is located, Roman artifacts have become clearer as debris is removed.

Among the artifacts are the stage and walls of an ancient theater and stones used in the construction. When the destruction is completely finished, excavations will start in 2015, according to officials. 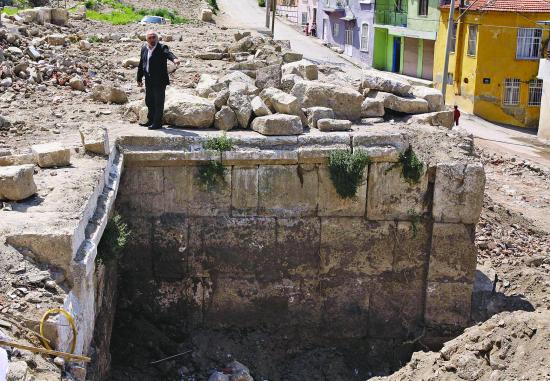 The most comprehensive information about the ancient theater in Kadifekale can be obtained in the studies of Austrian architects and archaeologists Otto Berg and Otto Walter, who conducted studies in the region in 1917 and 1918, from their plans and drawings.

The remains of the theater, which is thought to have held a capacity of 16,000 people, has characteristics of the Roman era according to many researchers, the study reports.

Ancient resources claim Saint Polycarp from İzmir was killed in this theater during the early ages of Christianity, namely the paganism period of the Roman era, suggesting the theater has witnessed some tragic events in history.

When completed, shows and concerts will be organized in the theater just like in the Ancient Theater of Ephesus.

Speaking to Anadolu Agency, the Amasra Museum Director Baran Aydın said they thought some parts of the ancient theater had been covered during the highway construction. A large part of the theater could be revealed if excavations are carried out in the area, he said.

“We don’t exactly know how many parts of the theater have been protected. The best protected side of the theater is its tunnel called ‘Vomitorum.’ Unfortunately, since the area is used as a graveyard, we cannot carry out archaeological excavations at the moment. If it is moved, we can start excavations. But this is a complicated process for both the municipality and the relatives of the deceased,” the director said.

Aydın said the ancient theater in Amasra was as large as the ancient city of Teos in İzmir’s Seferihisar. 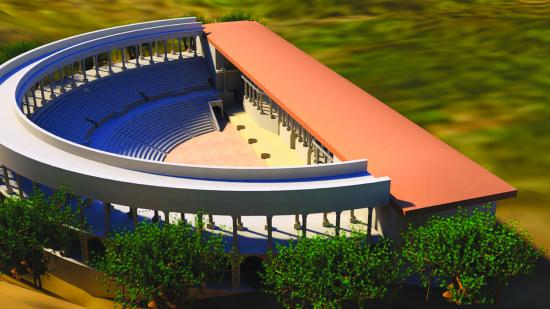 “It was a theater that possibly held the capacity of 15,000 people in a 250-300 meter diameter. We should drill there and find the walls on the right and left, which we call ‘Analemna.’ Then we can speak about the theater,” he said, adding that excavations should be conducted in five-six points in the area.