Skull points to a more complex human evolution in Africa 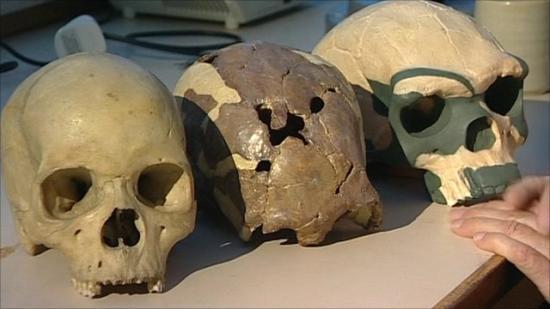 Scientists have collected more evidence to suggest that ancient and modern humans interbred in Africa.

Reanalysis of the 13,000-year-old skull from a cave in West Africa reveals a skull more primitive-looking than its age suggests.

The result suggests that the ancestors of early humans did not die out quickly in Africa, but instead lived alongside their descendents and bred with them until comparatively recently.

The results are published in PLoS ONE.

The skull, found in the Iwo Eleru cave in Nigeria in 1965, does not look like a modern human.

It is longer and flatter with a strong brow ridge; features closer to a much older skull from Tanzania, thought to be around 140,000 years old.

Prof Katerina Harvati from the University of Tuebingen in Germany used new digitising techniques to capture the surface of the skull in detail.

The new technique improved upon the original measurements done with callipers by letting researchers see subtler details about the skull's surface. 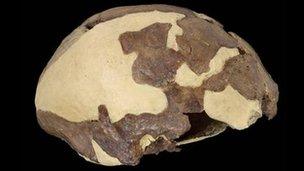 "[The skull] has got a much more primitive appearance, even though it is only 13,000 years old," said Chris Stringer, from London's Natural History Museum, who was part of the team of researchers.

"This suggests that human evolution in Africa was more complex... the transition to modern humans was not a straight transition and then a cut off."

Prof Stringer thinks that ancient humans did not die away once they had given rise to modern humans.

They may have continued to live alongside their descendants in Africa, perhaps exchanging genes with them, until more recently than had been thought.

The researchers say their findings also underscore a real lack of knowledge of human evolution in the region.

But palaeontologists are not all agreed on precisely what the new analysis is telling us - or, indeed, whether it is telling us anything definitive at all.

"I do not think that these findings add anything new to our view," said Prof Clive Finlayson, director of the Gibraltar Museum, who was not connected to the study.

"We have a few fossils, and no idea of natural variation within populations. That the situation is not simple and is deep and complex is what we would expect.

"In my view, it is the field of genetics that will help us most in clarifying matters," he told BBC News.

Separate research published earlier this month suggests that genetic mixing between hominin species happened in Africa up to 35,000 years ago.

In recent years the Later Stone Age has been redated to a much deeper time depth than previously thought. At the same time, human remains from this time period are scarce in Africa, and even rarer in West Africa. The Iwo Eleru burial is one of the few human skeletal remains associated with Later Stone Age artifacts in that region with a proposed Pleistocene date. We undertook a morphometric reanalysis of this cranium in order to better assess its affinities. We also conducted Uranium-series dating to re-evaluate its chronology.

A 3-D geometric morphometric analysis of cranial landmarks and semilandmarks was conducted using a large comparative fossil and modern human sample. The measurements were collected in the form of three dimensional coordinates and processed using Generalized Procrustes Analysis. Principal components, canonical variates, Mahalanobis D2 and Procrustes distance analyses were performed. The results were further visualized by comparing specimen and mean configurations. Results point to a morphological similarity with late archaic African specimens dating to the Late Pleistocene. A long bone cortical fragment was made available for U-series analysis in order to re-date the specimen. The results (~11.7–6.3 ka) support a terminal Pleistocene chronology for the Iwo Eleru burial as was also suggested by the original radiocarbon dating results and by stratigraphic evidence.

Our findings are in accordance with suggestions of deep population substructure in Africa and a complex evolutionary process for the origin of modern humans. They further highlight the dearth of hominin finds from West Africa, and underscore our real lack of knowledge of human evolution in that region.