It's dim up north

It's dim up north

The farther that human populations live from the equator, the bigger their brains, according to a new study by Oxford University. But it turns out that this is not because they are smarter, but because they need bigger vision areas in the brain to cope with the low light levels experienced at high latitudes.

Scientists have found that people living in countries with dull, grey, cloudy skies and long winters have evolved bigger eyes and brains so they can visually process what they see, reports the journal Biology Letters.

The researchers measured the eye socket and brain volumes of 55 skulls, dating from the 1800s, from museum collections. The skulls represented 12 different populations from across the globe. The volume of the eye sockets and brain cavities were then plotted against the latitude of the central point of each individual’s country of origin. The researchers found that the size of both the brain and the eyes could be directly linked to the latitude of the country from which the individual came. 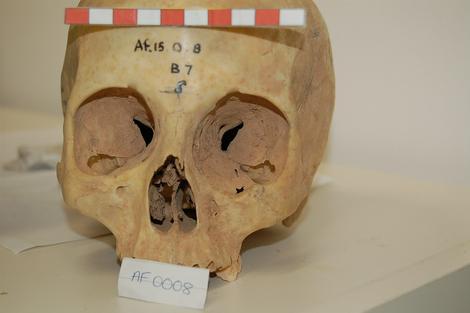 Lead author Eiluned Pearce, from the Institute of Cognitive and Evolutionary Anthropology in the School of Anthropology, said: "As you move away from the equator, there's less and less light available, so humans have had to evolve bigger and bigger eyes. Their brains also need to be bigger to deal with the extra visual input.  Having bigger brains doesn't mean that higher latitude humans are smarter, it just means they need bigger brains to be able to see well where they live."

Co-author Professor Robin Dunbar, Director of the Institute of Cognitive and Evolutionary, said: ‘Humans have only lived at high latitudes in Europe and Asia for a few tens of thousands of years, yet they seem to have adapted their visual systems surprisingly rapidly to the cloudy skies, dull weather and long winters we experience at these latitudes.’

That the explanation is the need to compensate for low light levels at high latitudes is indicated by the fact that actual visual sharpness measured under natural daylight conditions is constant across latitudes, suggesting that the visual processing system has adapted to ambient light conditions as human populations have moved across the globe.

The study takes into account a number of potentially confounding effects, including the effect of phylogeny (the evolutionary links between different lineages of modern humans), the fact that humans living in the higher latitudes are physically bigger overall, and the possibility that eye socket volume was linked to cold weather (and the need to have more fat around the eyeball by way of insulation).

The skulls used in the study were from the indigenous populations of England, Australia, Canary Islands, China, France, India, Kenya, Micronesia, Scandinavia, Somalia, Uganda and the United States. From measuring the brain cavity, the research suggests that the biggest brains belonged to populations who lived in Scandinavia with the smallest being Micronesians.

This study adds weight to other research that has looked at the links between eye size and light levels. Other studies have already shown that birds with relatively bigger eyes are the first to sing at dawn in low light. The eyeball size across all primates has been found to be associated with when they choose to eat and forage – with species with the largest eyes being those that are active at night.