Isles of Scilly (G-B): Bronze Age pottery sherd could be earliest British depiction of a boat 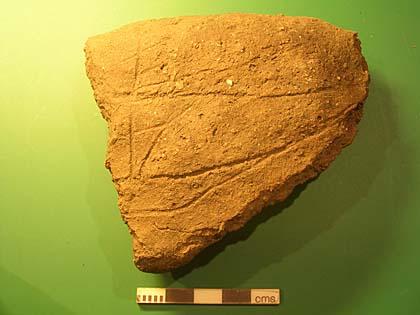 More than most archaeological periods from pre-history, Britain’s Bronze Age is constantly being re-assessed as archaeologists and historians find new evidence of its richness and complexity.

Now the boundaries of what we know about this increasingly sophisticated period are being pushed even further by a small pottery sherd which is currently on display at the National Maritime Museum in Cornwall.

The piece of pottery was found during archaeological excavations of a Late Bronze Age roundhouse on St Agnes, on the Isles of Scilly, in 2009, and some archaeologists believe it clearly shows etched lines that resemble a sailing ship.

For Sean Taylor, an archaeologist with the Cornwall Council Historic Environment Service (CCHES), the find could be hugely significant for our understanding of the Bronze Age.

“The sherd is part of a small thick-walled vessel, perhaps a cup or beaker, and it’s highly unusual in that it has been inscribed, prior to firing, with a freehand design,” he explains.

“If this is a ship, and it does look like a masted ship, then this is the earliest representation of a boat ever found in the UK.”

Taylor believes the inscription could represent a Phoenecian trading vessel, which was blown off course and was seen by our Bronze Age forebears as it passed the Scillies.

“This would have been a remarkable sight worth commemorating, hence it being drawn on a pot," he says.

“However, masted boats are not known in this country until the first century BC. This sherd dates back to 1000-800BC confirming the importance and rarity of this object.”

The sherd, which is on display as part of the museum’s exhibition, 2012BC: Cornwall and the Sea in the Bronze Age, was found by archaeologists from the CCHES on a site owned by the Cornwall Rural Housing Association.