Is Your Salmon Small Because of Hungry Cavemen?

Stone Age hunters didn’t need to tell fish tales—the fish they caught really were whoppers, according to a new study.

Remains of prehistoric fish dinners from caves in northern Spain suggest that Atlantic salmon(Salmo salar) and brown trout (Salmo trutta) have shrunk significantly in size over the past 20,000 years—from a combined average of up to 5 pounds (2.2 kilograms) to about a pound (0.4 kilogram). 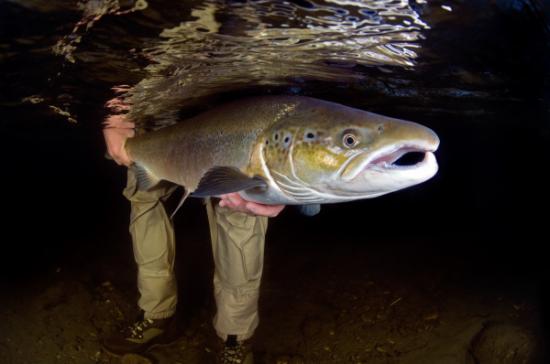 A fisherman releases an Atlantic salmon into Norway’s Orkla River in September 2008. Photograph by Wild Wonders of Europe/Lundgren/National Geographic

What’s more, it’s because of our ancient ancestors’ fishing skills that rivers in the region today are populated with much smaller fish, according to a team of scientists from the University of Oviedo in Spain.

“Bigger fish will be more valuable as food,” said archaeologist Pablo Turrero, who led the study. “They would only have caught the small fish if they absolutely had to because there was nothing else.”

Over time, prehistoric hunters’ preference for catching big ones caused salmon and trout to downsize, because proportionally more small fish survived to breed and pass on their genes.

A trend for shrinking sizes starts to show up in the cave fish fossils about 10,000 years ago, “but size selection had been going on all the time,” said Turrero.

Published October 22 in the journal Royal Society Open Science, the study compared the backbones of about 30 Atlantic salmon and brown trout specimens unearthed at ten prehistoric sites in the northern province of Asturias  with those of their living descendants.

These calculations revealed the ancient fish averaged 6 to 10 inches (16 to 26 centimeters) longer than those types of salmon and trout in the same rivers today.

Turrero said this equates to a typical weight of 2.9 to 5 pounds (1.3 to 2.2 kilograms), whereas the modern-day Asturias angler can expect an average catch that weighs less than a pound (0.4 kilogram).

The fossils also indicate that the modern humans who replaced the Neanderthals some 40,000 years ago were serious about fishing “pretty much as soon as they started settling in the region,” according to Turrero.

Fish meal leftovers found in the caves aren’t as abundant as those of prey animals such as deer, “but you always get them,” Turrero added.

Often burnt, the fish fossils show that hunters “would catch the fish in the nearest stream, then bring them to the cave to cook by the fire,” he said.

Past excavations at the fishbone sites have found evidence for these fires, as well as the human remains of these prehistoric salmon-eaters.

Though no fishing gear remains have been identified to date, such artifacts have been found at similarly aged sites elsewhere in Europe.

The ancient salmon hunters may have used hooks made from mollusk shells, traps made of branches, spears, or even their bare hands, Turrero added.

The importance of salmon and trout to these cavemen can also be seen in two Asturias caves that boast extremely rare Ice Age examples of ancient fish paintings, Turrero noted.

In addition to human preference, climate change and other factors also likely played a role in shrinking fish size over time, the study authors said.

Karin Limburg, a fish expert at the State University of New York’s College of Environmental Science and Forestry, agreed.

However, “given that humans have been in that region for a very, very long time, and salmon running into rivers would have been a great source of protein,” the new finding is “not so surprising,” Limburg said.

“What strikes me about the study is that it shows, yet again, size declines in a fish that is exploited by humans,” she added. “The more we look, the more we see this has occurred.”