Is That Skeleton Gay? The Problem With Projecting Modern Ideas Onto The Past

This week represents two bookends to my foray into scholarly public outreach: new reports of "gay lovers" from Pompeii casts and the six year anniversary of the hubbub over the "gay caveman" skeleton.  These and other similar skeletons represent both a desire to better understand our collective human past and a curious need to project our current cultural baggage backwards.

First up, Pompeii. A pair of casts -- made in the 19th century from plaster that filled the void of soft tissue and preserved the skeletons -- represents two people found close together following the eruption of Vesuvius in 79 AD. They've been said to be "embracing," and an early interpretation was of "two maidens." But this week, DNA testing on the remains revealed both were chromosomally male and not directly related. Cue the media coverage of "gay lovers" (Telegraph) and "the two maidens were men" (Daily Mail), without critical assessment of any of these loaded terms.

What's especially strange is that two men who died in the same place at the same time in a catastrophic event are assumed to have been lovers. As classicist David Meadows tells me, "They weren't 'gay' when they were thought to be women." 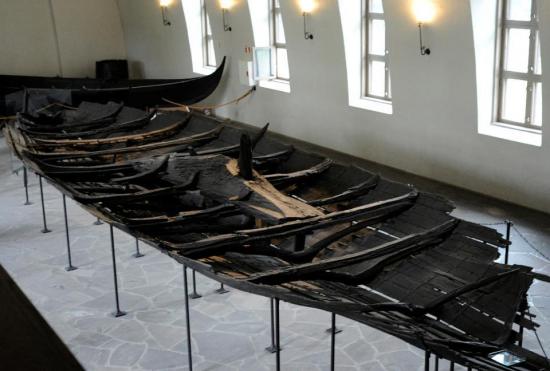 A restorer works on a petrified victim of the eruption of Vesuvius volcano in 79 BC, as part of the restoration work and the study of 86 casts in the laboratory of Pompeii Archaeological Site, on May 20, 2015 in Pompeii. (MARIO LAPORTA/AFP/Getty Images)

While the archaeologists involved in the new study make it clear in the Telegraph piece that the nature of the relationship is impossible to determine, the media's jumping to a conclusion about sexual attraction and applying the modern label "gay" -- which is quite anachronistic in terms of ancient Roman culture -- reveals much more about our modern culture's obsession with this topic than it tells us about the Romans.

A similar issue exactly six years ago was a catalyst for my start in media criticism of bioarchaeological finds: the "gay caveman" or "transgender caveman." The skeleton of this third millennium BC individual from the Czech Republic suggested male sex; however, the person was buried in a somewhat anomalous way for the time and place, and suffered a similar media over-interpretation. As I wrote at the time:

However, it's important to note that biological sex, gender, and the choice of sexual partner are not interchangeable terms, as much as we interchange them in American culture. Most people are born into one of two sexes (male/female), but there are intersexed or third-sex individuals, sometimes people with chromosomal differences. But people are conditioned by culture to perform a gender role (man/woman, masculine/feminine). And people generally choose to engage in sexual intercourse with: someone of the opposite sex (heterosexuality or "straight"), the same sex (homosexuality or "gay"), both sexes (bisexuality), or no one (asexuality).

In the Telegraph and Mail articles, then, all three of these terms are being conflated, sometimes by the archaeologists themselves. If this burial represents a transgendered individual (as well it could), that doesn't necessarily mean the person had a "different sexual orientation" and certainly doesn't mean that he would have considered himself (or that his culture would have considered him) "homosexual."

In the intervening six years, there have been a number of similar cases where 21st century technology -- ancient DNA analysis -- has been overturning long-held assumptions about the biological sex of particular skeletons and causing researchers and the media to rethink their interpretations of ancient relationships. For example, DNA analysis in 2015 of a Pazyryk burial that had been assumed for decades to be a 16-year-old girl showed that the skeleton was actually male. The interpretation of the burial changed suddenly from an unusual "warrior princess" dressed in male clothing to, well, a rather normal teenage boy. 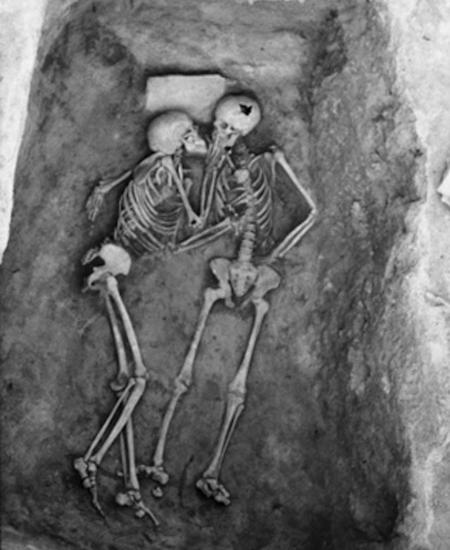 Other skeletons haven't been subjected to DNA analysis yet. There are the "Hasanlu Lovers" from a site in Iran dated to 800 BC. Found in 1973 by a University of Pennsylvania team, one skeleton is likely male based on the osteological indicators of sex, and the other's sex is less clear but more male than female. The limits of osteological sex assessment are clear; there are many times when we can't be certain what biological sex someone was, and the majority of the time we can't tell anything about culturally-constructed gender.

But while the Penn Museum of Archaeology and Anthropology's webpage explains the male-possibly male skeletons pretty well -- they may have been family members such as father and son -- Wikipedia interestingly asserts that they are male and female. Because of the visual of a hand on the face, a chin tilted upwards, a body turned sideways, we are tempted to see a woman and man kissing because we are enculturated to see in this representation a heteronormative embrace.

Projecting our contemporary assumptions about sex, gender, and sexuality onto the past is clearly problematic, but examples abound. In her book The Bioarchaeology of Socio-Sexual Lives: Queering Common Sense About Sex, Gender, and Sexuality, anthropologist Pamela Geller provides numerous examples of this phenomenon and takes on the issue of heteronormativity in interpreting the past. One of her central points, she writes, is that "discoveries of decedents whose bodies have been identified as romantically entangled, compulsorily reproductive, or occupationally divided say more about our present state of socio-sexual affairs than they do about past interactions and intimacies."

"The Lovers of Valdaro", a pair of skeletons dating to the Neolithic period from Mantua, Italy - Dagmarr Hollmann / Wikimedia Commons / CC BY-SA 4.0

From the "gay caveman" to the "Hasanlu Lovers" to the "gay lovers" from Pompeii, it is clear that both the media and the public are interested in the idea that people of the past were just as diverse in gender identities, gender expressions, and sexual attraction as we are today. Considering the fairly recent advances in LGBTQ rights in the U.S., it is in a way heartening to see non-heteronormative interpretations discussed in the mainstream media.

But interpreting new skeletons and new DNA data, however, requires both context and nuance that are often lost in popular presentations of archaeological data. While we should absolutely consider the similarities between daily lives of past people and ours today, we also need to remember that contemporary terms cannot necessarily be used in the same way, and that faulty and biased modern assumptions can pervade our interpretations of the past if we are not careful.