Judging by the numerous Biblical stories, victory stele and battle reliefs, war seems to have been widespread in antiquity. But in our modern world of jets, rockets and tanks, how much do we understand about the workings and weapons of ancient warfare? Thanks to archaeology, the answer is: Quite a lot.

A recent exhibit and accompanying lectures at the Western Science Center in Hemet, California—in partnership with La Sierra University—brought the world of battle to life for visitors at Weapons and War in the Iron Age. The artifacts from La Sierra’s collection, including arrows, spears and swords, date mostly to the Iron Age (c. 1200–600 B.C.) and come from archaeological sites in Jordan, Israel and Palestine. In addition to learning about the sights and sounds of war, preparations for battle, rituals before war and the historical impact of war, visitors were able to touch and hold lifelike replicas of the Iron Age weapons. After trying them out, board director and former California state senator David Kelley was quoted as saying that “I think the people had to be really strong to wield those swords. They’re heavy and they’re awkward, and you kind of wonder how much damage did they do in combat.” He continued, “Your enemy’s going to have to be right on top of you.”
It turns out that the deadliest war weapon may not have been made of metal, however. In a paper given at the 2012 meeting of the Society of Biblical Literature, Deborah Cantrell of Vanderbilt University demonstrated the deadly effectiveness of warhorses in antiquity. *

Setting the scene with the image of Queen Jezebel getting trampled under the hooves of Jehu’s chariot horses at Jezreel (2 Kings 9:33), Cantrell argues that this was an all-too-familiar fate for enemies in battle at that time. Citing Isaiah 14:19 and Ezekiel 26:11, she explains that “death by trampling under the sharp, flint hooves of warhorses was feared and dreaded as one of the most violent and disgraceful ways to die in the ancient world … In fact, horses’ hooves may have killed more enemies than arrows on the battlefield.” 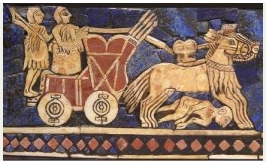 CHARIOT HORSES trample a fallen enemy in this detail from the 26th century Standard of Ur. Credit: The trustees of the British Museum/Art Resource, NY.

Arrows, spears and swords “had to be used with precision to kill instantly, something that the chaos of the battlefield usually prevented,” Cantrell explained. “Death from puncture wounds occurred days later from infection, as happened to King Ahaziah, who died later at Megiddo” (2 Kings 9:27). She believes those other weapons were used to knock down and incapacitate the enemy so that one’s horse could stomp him to death. Cantrell consulted with medical professionals who confirmed that 1,000-pound horses could kill a person within minutes, if not seconds, by bruising, crushing and puncturing various organs with repeated hoof steps.

Drawing on hundreds of years of archaeological finds, literature and ancient art from Egypt to Persia to Rome, Cantrell established the frequent motif of the fearsome reality of trampling by horses (or sometimes elephants!) as an effective way to dispatch one’s enemies.

The most interesting part of Cantrell’s presentation was when, based on her extensive knowledge as an equestrian expert, she illustrated the echoes of equestrian military training in modern times: “Advanced ‘martial arts’ schools for horses and riders developed war horses trained in special athletic movements designed to inflict maximum damage with their hooves in battle. It has developed over the centuries into what we now refer to as modern dressage, a sport in the Olympics since 1900.” These movements include kicking out with front or rear legs as well as repetitive stepping maneuvers in one spot, which would have stomped and trampled an enemy underfoot—all “ballet-like” athletic moves once used to incapacitate and kill in battle.

* Deborah Cantrell, “War Horses at Jezreel: Jezebel and Jehu,” presented at the annual meeting of the Society of Biblical Literature, Chicago, Illinois, November 2012.

Reference for this article