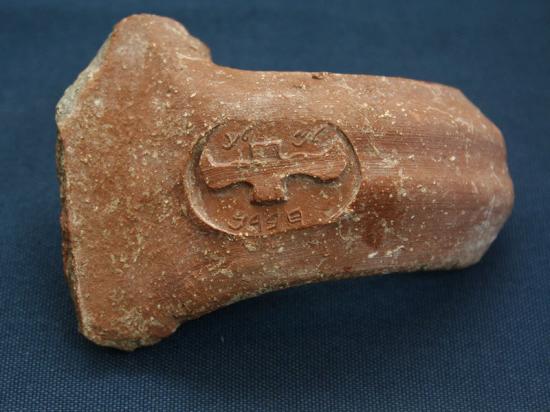 Ancient jar handles like this one, stamped with a royal seal, provide a detailed timeline of the Earth's magnetic field thousands of years ago. Image courtesy of Oded Lipschits

About 3,000 years ago, a potter near Jerusalem made a big jar. It was meant to hold olive oil or wine or something else valuable enough to send to the king as a tax payment. The jar's handles were stamped with a royal seal, and the pot went into the kiln.

Over the next 600 years, despite wars destructive enough to raze cities, potters in the area kept making ceramic tax jars, each one stamped with whatever seal represented the ruler du jour.

They didn't know it, but in the process, the ancient potters were not just upholding centuries of tax bureaucracy.

As a group of archaeologists and geophysicists wrote Monday in the journal PNAS, they were also creating a long-lasting record of activity some 2,000 miles beneath their feet. And that record is now yielding clues to a big mystery about this planet: how its magnetic field has changed over time.

"Albert Einstein defined this problem as one of the five most enigmatic issues in modern physics, and it still is, because the mechanism that creates the magnetic field is not well understood," says Erez Ben-Yosef, an archaeologist at Tel Aviv University in Israel and an author of the paper.

Since the invention about 180 years ago of the magnetometer, a device that can measure the strength of a magnetic field, scientists have noticed something confusing and a little worrisome over the years.

That's concerning, he says, because the magnetic field protects the Earth from high levels of radiation coming from space.

But fear not, Ben-Yosef says. The jars hold hope.

Tiny minerals in the clay of this jar hold information about the strength of the Earth's magnetic field at the time the jar was fired, thousands of years ago. Image courtesy of Oded Lipschits

All those years ago, as potters continued to throw clay, the molten iron that was rotating deep below them tugged at tiny bits of magnetic minerals embedded in the potters' clay. As the jars were heated in the kiln and then subsequently cooled, those minerals swiveled and froze into place like tiny compasses, responding to the direction and strength of the Earth's magnetic field at that very moment.

"It's kind of like a tape recorder," Ben-Yosef says.

Political instability provided another handy recording, because the royal seals stamped onto the jars changed often enough to allow the researchers to narrow down the timing of those magnetic records to windows of about 30 years.

"Instability — or even better, wars and destruction — are the best for us," says Ben-Yosef. (Peaceful transitions are nearly impossible to spot in sedimentary layers, but something like a burned city makes a clearly visible dark line. And the Assyrians had a knack for destroying cities.)

So, for example, archaeologists know that the Assyrians destroyed Judah, also known as Judea, in 701 B.C. and subsequently replaced the tax jar seal.

When Ben-Yosef and his colleagues studied 67 jar handles spanning from the late 8th century B.C. to the late 2nd century B.C., they found that the Earth's magnetic activity has been a lot choppier than people expected.

For example, the jars indicate that in the late 8th century B.C., the core went a little crazy. The intensity of the magnetic field spiked to about double what it is today.

"It was the strongest it's been, at least in the last 100,000 years, but maybe ever. We call this phenomenon the Iron Age spike," Ben-Yosef says.

Then, it weakened quickly after 732 B.C.E., losing about 30 percent of its intensity in just 30 years.

It's counterintuitive, but massive fluctuations like the Iron Age spike, Ben-Yosef says, indicate there's nothing to worry about when it comes to today's weakening magnetic fields. Fluctuation, he says, must be the norm for our planet's magnetic field, not a harbinger of apocalypse.

The jars provide an unprecedented look at the planet's magnetic field over those six centuries, one that's much harder to get from rocks.

Geologist Steven Forman of Baylor University has also found evidence of a magnetic spike about 3,000 years ago, based on his study of Hall's Cave in Texas.

"But we didn't have the type of time resolution that the study in PNAS has," he says, because it's a lot harder to pinpoint rocks on a timeline than it is to pinpoint man-made objects. "That's what so cool about what they did. They pulled this out of heated ceramics."

He says the jar record shows the magnetic field is likely a lot more dynamic and nimble than researchers thought it would be.

Scientists knew the Earth could undergo big changes in magnetic intensity — the poles are thought to reverse about every 200,000 to 300,000 years. But in between those times, Forman says, people assumed there wasn't much going on. This study shows magnetic fields going about a quarter of the way toward reversal, and boomeranging back, all within just a few decades.

The finding, he adds, "opens up a big can of worms" because researchers just don't know how or why that would happen.

So there's something missing about scientists' concept of goings on in the Earth's core.

And scientists can thank political instability, war, relentless tax bureaucracy and all those potters for the hint.

Benjamin Franklin was right: "In this world nothing can be said to be certain, except death and taxes." And maybe also ancient potters.