It isn’t rare to see bones that have a color other than the usual lab-cleaned white or dirt-stained brown. In my post on colored bones from a few years ago, I discussed a number of colors that bones can become due to staining from other objects or substances. Black staining has been found on human remains from Mexico. Studies of these remains showed that it could be attributed to bitumen, a black organic substance that is also found on the insides of shrouds from Albanian archaeological sites. It was likely coated over the individual at death as a kind of paint. Another example is the appearance of green stains- most commonly found in historic burial contexts. Green stains occur when bones come into contact with copper or bronze that has begun to degrade. Green stains most frequently occur as small lines along the body where pins may have held the shroud closed, or near the mouth if a coin had been placed there at death (coins were placed in the mouth or on the eyes as payment for the ferryman to take them across the river Styx. 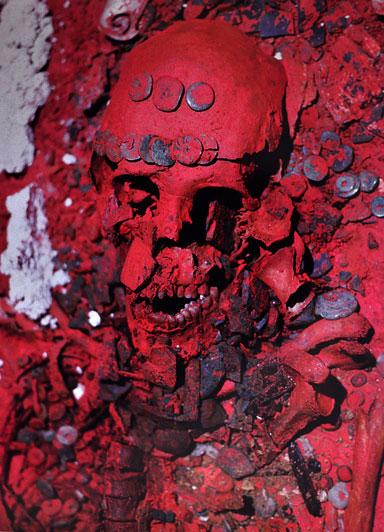 Skeleton of the Red Queen, coated in cinnabar

Red stains are usually attributed to natural substances like ochre, which when combined with water can make a non-toxic oil like paint. However, a new study by Avila et al. (2014) looks deeper into the presence of red colored bones in Mesoamerica and questions are current understanding of this color in mortuary contexts. Natural occurring pigments are often created from toxic compounds, among these is cinnabar- a compound of mercury and sulfur. In Mesoamerica, it can be found mixed into paint used for the body, dishes and kitchen tools, and used on buildings. Cinnabar creates a red color, which is often related to the underworld in this region. High status burials from Teotihuacán and Palenque have been discovered with red pigment on their bones, showing that this color had important symbolic meaning. It was thought that the bodies of the dead were covered in cinnabar to give them a red hue. However, a closer look into the chemical makeup of cinnabar and its interaction with human remains has shown that in order to end up staining the bone, rather than just appearing on the surface, the cinnabar needed to have been inhaled, consumed or rubbed on the skin of a living individual. Therefore, Avila et al. (2014) want to examine whether individuals from Mesoamerica are interacting with cinnabar in life, or if it is placed on the body after death.

Individuals were studied from four Mesoamerican sites: the Serrena cultural site of Ranas (250 to 1000 CE), the classic Mayan site of Jaina (300-900 CE), the preclassic Zapotec site of Monte Albán (2000 BCE – 200 CE) and Mayan site of Tlatelolco (1300-1557 CE). All samples have a red pigmentation to the bone that cannot be differentiated by macroscopic examination (meaning they all appear similar to the naked eye). Samples were taken from bone which had the strongest concentration of red pigment as well as teeth. Five bone samples and one tooth were selected from Ranas, one molar from Jaina and another molar from Tlatelolco, and a piece of skull from Monte Albán. Scanning electron microscopy was used in order to examine magnified morphology of the samples. X-ray diffraction was used in order to determine the chemical makeup of the red toned samples.

The results of their study showed that in the bone at Ranas and Monte Albán, there was evidence of the red pigment on the surface as well as within the bone itself, whereas at Jaina and Tlatelolco there is only evidence of pigment on the bone’s surface. Further, analysis of the pigment showed that it was primarily cinnabar and that the mercury of the cinnabar was the most evident element within the bone. So what does this mean? If bones were covered in cinnabar as part of a mortuary ritual then the bone would only be red on the surface of the bone, like the human remains from Jaina and Tlatelolco. However, at Ranas and Monte Albán the mercury from the cinnabar is found in the matrix of the bones themselves. The site of Ranas has a close relationship with a cinnabar mine- their main activity and specialization at the site involved exploitation of cinnabar.

Understanding how the pigment is put on bones is important because if ingested or inhaled in life, it can cause problems similar to mercury poisoning, and potential cause health issues. The finding of color in Monte Albán could be that dishes painted with the pigment got into their food. Mercury poisoning from cinnabar led to serious health issues- ingestion or inhalation could lead to shaking, loss of sense, and death. During the Roman Imperial period, mining of cinnabar in Spain was akin to getting the death sentence- it was a job reserved for slaves and the condemned.