'It's the most unique garment known to have been created in the Canadian Arctic,' says Smithsonian researcher

U.K. design label, KTZ, 'copied' the design from an Inuit shaman's parka considered by experts as the 'most unique garment known to have been created in the Canadian Arctic.' (Kieran Oudshoorn/CBC (from book Northern Voices) /Tristan Fewings/Getty Images)

An Inuit shaman's parka copied by KTZ, a U.K. design label, has been the subject of study for generations and is considered by experts as the "most unique garment known to have been created in the Canadian Arctic."

The fashion label's fall 2015 men's collection includes a number of garments based on traditional Inuit designs, including a sweater that has a pattern almost identical to that on a shaman's caribou skin parka that dates back to the early 1900s.

The design was used without the consent of the shaman's descendants in Nunavut. In response to a CBC News report last week, KTZ apologized to the family and pulled the sweater from its online stores.

The story has sparked interest in the origins of the parka and the meaning behind its symbolic designs.

"It's the most unique garment known to have been created in the Canadian Arctic," said Bernadette Driscoll Engelstad, a research collaborator with the Smithsonian Arctic Studies Centre.

Packed away in storage

Driscoll Engelstad came across the shaman's robe in 1978.

"It was packed away in a storage box in the storeroom of the American Museum of Natural History and I don't think it had been exhibited or even maybe looked at since its collection," she said.

The parka was purchased by a whaling ship captain, George Comer, who regularly travelled to the Arctic between 1897 to 1912.

Experts agree that Comer purchased the parka in Igloolik from Ava (Awa), the son of shaman Qingailisaq. The parka came into the collection of the American Museum of Natural History around 1902.

The design on the parka is what sets it apart from other shaman robes from the region, said Driscoll Engelstad.

Experts say that the parka, which includes a pair of gloves and a hat, bears some resemblance to a Siberian shaman's coat.

"There are other types of shaman's garments across the Arctic, but none of them are of a vision," said Driscoll Engelstad.

The story behind the design

There are multiple theories of what the design on the shaman's robe represents.

Franz Boas, a German-American anthropologist who has been called the "father of American anthropology," first wrote about the design in the garment in 1907 in the second volume of his book The Eskimo of Baffin Land and Hudson Bay. 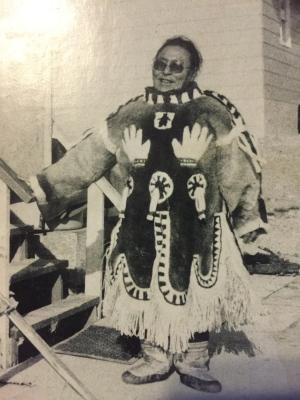 In 1983 the social anthropologist Bernard Saladin d'Anglure commissioned three replicas in partnership with the community in Igloolik. Above Martha Angugatiaq Ungalaq, models the replica she helped create. (Sima Sahar Zerehi/CBC)

In the book, Boas recounts the story told to him by Comer, of the shaman Qingailisaq fatally wounding a caribou buck on a hunt. The animal transforms into a pregnant woman, who dies along with her child. The shaman is then confronted by her brothers who are also caribou people.

"The men told him to return to his people and tell them what had happened and to have his clothing made in the same way as the woman," wrote Boas.

There's another version of the story told by Ava, shaman Qingailisaq's son, 20 years later to Knud Rasmussen, a Danish polar explorer and anthropologist.

In this version, Ava says his father the shaman went home and had a robe made in the style of the Ijirait, the caribou mountain spirit people, but with the addition of hands in the front to show that these creatures had attacked him.

There are a number of other variations of this story told by Inuit in Nunavut. One fact agreed upon by all experts is that the garment is considered sacred and merits further study.

In 1983, social anthropologist Bernard Saladin d'Anglure brought the shaman parka to the public's attention by commissioning three replicas in partnership with the community in Igloolik.

Saladin d'Anglure said he convinced Laval University, the Canadian Museum of Civilization and the Prince of Wales Northern Heritage Centre in Yellowknife to help with the cost of the project by each giving $5,000 towards the re-creation of the garment.

The replica that headed to the Yellowknife museum was intended to be returned to Igloolik once a museum was built in the hamlet, said Saladin d'Anglure.

Teams of three to five seamstresses from Igloolik were employed to make each coat, including Martha Angugatiaq Ungalaq.

"Angugatiaq was the leader," said Saladin d'Anglure. "She was fantastic. She was known as the best seamstress."

Rhoda Ungalaq said she remembers seeing her mom work on replicating the parka.

"My mother was a very good designer and I think this was a special project for her," said Ungalaq. "She worked very hard on it."

Two additional versions of the garment were later made, one for the British Museum and another for a private collector who donated it to the Heard Museum of American Indian Art and History in Phoenix, Ariz.