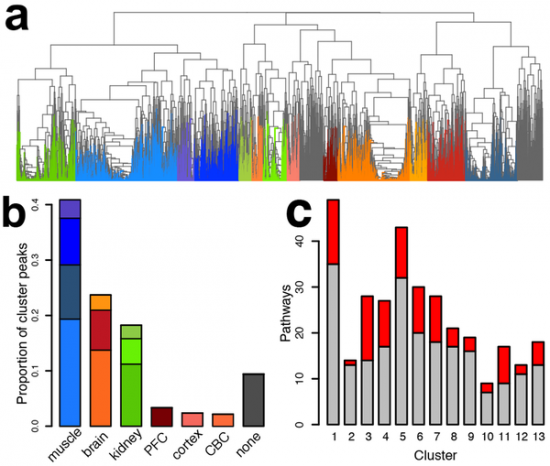 Tissue-specific metabolite clusters:   (a) Dendrogram of 9,603 metabolite peaks after hierarchical clustering, based on concentration profile correlations across tissues in all four species. The colors represent 13 metabolite clusters colored according to the tissue-specificity of the cluster concentration profiles: shades of red indicating brain-specific clusters, shades of blue: muscle-specific, and shades of green: kidney-specific clusters. Clusters cumulatively containing less than 10% of all assayed peaks were removed from further analyses and are colored in gray. (b) Proportions of peaks specific to a given tissue based on the cluster analysis. Colors of the bars correspond to the colors of clusters in panel a. (c) Numbers of pathways with significant enrichment of metabolites in the 13 metabolite clusters. The red part of each bar shows pathways with significant overrepresentation of enzymes with matching tissue-specific expression profiles.   doi:10.1371/journal.pbio.1001871.g002

The cognitive differences between humans and our closest living cousins, the chimpanzees, are staggeringly obvious. Although we share strong superficial physical similarities, we have been able to use our incredible mental abilities to construct civilisations and manipulate our environment to our will, allowing us to take over our planet and walk on the moon while the chimps grub around in a few remaining African forests.

But a new study suggests that human muscle may be just as unique. Scientists from Shanghai's CAS-MPG Partner Institute for Computational Biology, together with teams from German Max Planck Institutes, investigated the evolution of metabolites – small molecules like sugars, vitamins, amino acids and neurotransmitters that represent key elements of our physiological functions. Their study found that metabolite concentrations evolved rapidly over the course of human evolution in two tissues: in the brain and, more surprisingly, in muscle. An article describing their findings will be published on May 27th in the open-access journal PLOS Biology.

Genomes, including the human genome, accumulate changes steadily over time. Among the genetic changes that have happened over the course of human evolution, only a few might be responsible for the rise of distinct human features. To determine what other molecules played a role in human evolution, scientists began to look beyond the genome. The international team of scientists, led by Dr Philipp Khaitovich from Shanghai, examined for the first time the evolution of the human metabolome – the compendium of metabolites present in human tissues. "Metabolites are more dynamic than the genome and they can give us more information about what makes us human", says Khaitovich. "It is also commonly known that the human brain consumes way more energy than the brains of other species; we were curious to see which metabolic processes this involves."

Indeed, it turned out that unlike the uniformly-paced evolution of the genome, the metabolome of the human brain has evolved four times faster than that of the chimpanzee. What was more surprising, however, is that human muscle accumulated an even higher amount of metabolic change – ten times that of the chimpanzee!

To rule out the possibility that this change simply reflects our couch potato lifestyle, the scientists performed additional measurements in specially treated macaque monkeys. These macaques were moved from a spacious countryside facility to small indoor enclosures and served fatty and sugary food for several weeks, to imitate the environment of many contemporary humans. These lifestyle changes had only a small effect on the macaque muscle metabolome. "For a long time we were confused by metabolic changes in human muscle", says Dr Kasia Bozek, the lead author of the study, "until we realized that what other primates have in common, in contrast to humans, is their enormous muscle strength." Dr Josep Call, from the Wolfgang Kohler Primate Research Center in Leipzig, Germany, concurs: "This is common knowledge to all the zoo keepers, but it was never tested systematically." To prove their point, researchers involved several chimpanzees, macaques, university students, and even professional athletes in a pulling strength competition. Despite their sweat and determination, all of the human participants of the experiment were outcompeted by their primate opponents by more than two-fold.

A tantalizing hypothesis suggested by the scientists is that the metabolic roles of human brain and brawn are intertwined. "Our results suggest a special energy management in humans, that allows us to spare energy for our extraordinary cognitive powers at a cost of weak muscle", summarizes Dr Kasia Bozek. "The world of human metabolomics is just starting to open up its secrets to us", adds Dr Patrick Giavalisco, who led the metabolome measurement effort at the Max Planck Institute for Molecular Plant Physiology in Golm. "Such human-specific metabolic features we find could be related not only to physical or cognitive performance but also to common human metabolic diseases".