It has been proposed that Neandertals had about 30% higher gross cost of transport than anatomically modern humans (AMH) and that such difference implies higher daily energy demands and reduced foraging ranges in Neandertals. Thus, reduced walking economy could be among the factors contributing to the Neandertals' loss in competition with their anatomically modern successors. Previously, Neandertal walking cost had been estimated from just two parameters and based upon a pooled-sex sample. In the present study, we estimate sex-specific walking cost of Neandertals using a model accounting for body mass, lower limb length, lower limb proportions, and other features of lower limb configuration. Our results suggest that Neandertals needed more energy to walk a given distance than did AMH but the difference was less than half of that previously estimated in males and even far less pronounced in females. In contrast, comparison of the estimated walking cost adjusted to body mass indicates that Neandertals spent less energy per kilogram of body mass than AMH thanks to their lower limb configuration, males having 1–5% lower and females 1–3% lower mass-specific net cost of transport than AMH of the same sex. The primary cause of high cost of transport in Neandertal males is thus their great body mass, possibly a consequence of adaptation to cold, which was not fully offset by their cost-moderating lower limb configuration. The estimated differences in absolute energy spent for locomotion between Neandertal and AMH males would account for about 1% of previously estimated daily energy expenditure of Neandertal or AMH males. 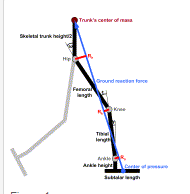 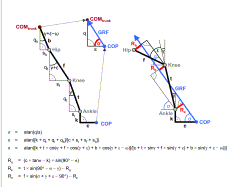 Calculation of the angle (σ) between the vector of the ground reaction force (GRF) and the sole of the foot and calculation of the moment arms of the GRF at the hip (Rh), knee (Rk) and ankle (Ra) at each 1/1000 of stance phase, where b is distance between the trunk's center of mass (COMtrunk) and hip joint center (= skeletal trunk height/2; mm), f is femoral length (= femoral bicondylar length; mm), t is tibial length (= tibial maximum length; mm), k is ankle height (= talar articular height + calcaneal height; mm), c is horizontal distance between ankle joint center and center of pressure (COP; = proportion of subtalar length; mm), γ is ankle joint angle (°), ε is knee joint angle (°), and ω is hip joint angle (°). 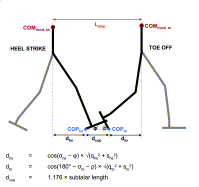