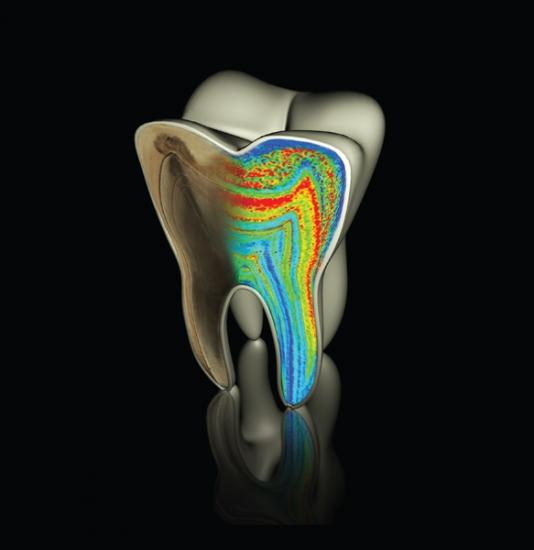 By measuring the relative amounts of barium and calcium on a tooth's growth lines, scientists showed that a Neanderthal infant probably switched to a solid diet relatively early.  - IAN HARROWELL, CHRISTINE AUSTIN, AND MANISH ARORA

The changing ratios of calcium and barium in the teeth of modern humans and macaques chronicle the transition from mother’s milk to solid food — and may provide clues about the weaning habits of Neanderthals, a new study suggests.

The predominant mineral in the tooth enamel of primates is hydroxyapatite, a form of calcium phosphate. But trace elements present in the bloodstream that are chemically similar to calcium, such as strontium and barium, can be incorporated into enamel as it calcifies, says Manish Arora, an environmental chemist at the Icahn School of Medicine at Mount Sinai in New York. Teeth begin forming in the gums before birth, and they record daily growth lines throughout their development, so they are good archives of diet and chemical exposure — even in infants.

Previous research has shown that variations in the strontium-to-calcium ratio preserved in teeth provide insight into infant diet, including the age at which children were weaned1.

In the new study, Arora and his colleagues looked at barium-to-calcium ratios in the teeth of macaques and humans with known diet and breastfeeding habits, including 'baby teeth' shed by children who had been part of a broader medical study.

The results showed that little if any barium was transferred to either humans or macaques before birth, says Arora. But the proportion of barium recorded in tooth enamel shot up immediately after birth, because breast milk contains high levels of the element. Ratios waned as mothers began to supplement the infants’ diet with other food, and then dropped to low levels when breastfeeding ceased, the researchers report in Nature2.

But the study's most intriguing data may be those gleaned from the tooth of a Neanderthal infant. The results suggest that the infant was exclusively breastfed for a little over 7 months, and then the mother’s milk was supplemented with other food for another 7 months. After that, barium levels dropped rapidly, suggesting a sudden end to breastfeeding.

Arora says that 14 months is relatively early to wean a child: humans in non-industrial societies stop breastfeeding at an average age of about 2.5 years.

The team's results were based on a single sample of Neanderthal tooth, which makes it difficult to draw broad conclusions. Perhaps Neanderthals typically weaned their young more quickly than humans, suggesting that they may have had children at shorter intervals, says Louise Humphrey, an anthropologist at the Natural History Museum in London. But she says it is also possible that the abrupt end to breastfeeding indicates that the infant’s mother may have fallen ill or died.

Both scenarios have profound implications for Neanderthal social structure, says Humphrey. A mother with a large brood would probably have required help with child care — suggesting that Neanderthal families and group members routinely assisted each other. And if weaning occurred because the mother was ill or absent, individuals such as siblings or other adult relatives might have stepped in to help raise the orphan, since a previous study suggested that the infant lived to age 8. “Regardless, we have to accept that there were other adults caring for this individual,” says Humphrey.

Weaning age affects many aspects of human demographics, including the minimum time between a woman’s pregnancies, says Holly Smith, a palaeoanthropologist at the University of Michigan in Ann Arbor. That, in turn, affects the overall rate of population growth. Analysis of teeth found at archaeological sites, therefore, could help researchers infer demographic information about ancient populations.

The analytical methods have “tantalizing” potential for addressing broader questions about human evolution, says Matt Sponheimer, an anthropologist at the University of Colorado in Boulder. But that will require well-preserved fossils, he adds. “It may be an uphill battle to apply this technique to much older material from the African continent.”