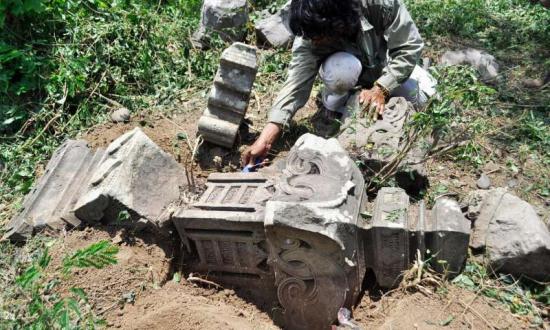 A team of researchers with members from Singapore, Indonesia, Ireland and the U.K. has found more evidence of a tsunami approximately 600 years ago that destroyed communities in the same part of Sumatra as the 2004 tsunami. In their paper published in Proceedings of the National Academy of Sciences, the group describes their study of gravestones and pottery in the area and what they found.

The Indian Ocean tsunami of 2004 was devastating, killing over 280,000 people and displacing millions. The tsunami was caused by an earthquake just off the coast of Sumatra, one of the islands that make up Indonesia. One of the hardest-hit areas was the province of Aceh—fatalities there were approximately 160,000. In this new effort, the researchers have found more evidence of a similar tsunami striking the same region in 1394.

Geologic evidence uncovered after the 2004 tsunami showed that there had been another tsunami 600 years earlier, but there was little evidence indicating how powerful or devastating it had been. The work by the new team began when one of its members came across several Muslim gravestones that had been uncovered by the 2004 tsunami. The researchers began searching in earnest for other evidence of people living in the area before and after the earlier tsunami.

The researchers report that they found evidence of 10 settlements in the area, nine of which had been completely destroyed by the 1394 tsunami. The 10th settlement was on a hilltop beyond the reach of the giant waves. Study of ceramics from the period showed the destroyed communities dated back to the 11th and 12th centuries. Study of the surviving settlement showed that the ceramics in the area from that time period came from as far away as Syria and China. It, too, suffered from the tsunami, however, as it went into decline after the tsunami. The researchers also found evidence that showed Muslim traders moving in to establish new communities where the old ones had stood. The researchers believe these people eventually established an Islamic kingdom known as the Aceh Sultanate. They further suggest that studies like theirs could provide more information regarding what happens to regions that are destroyed by tsunamis.