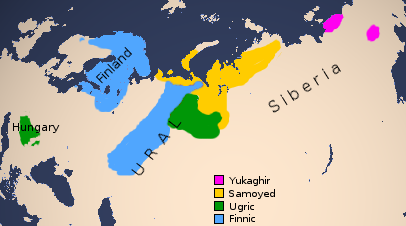 According to an abstract of a Ph.D thesis (below). This would appear to work well with the dating of the signature Y-chromosome haplogroup of Finno-Ugrians.
Bidrag till Fennoskandiens språkliga förhistoria i tid och rum (Heikkilä, Mikko)

My academic dissertation "Bidrag till Fennoskandiens språkliga förhistoria i tid och rum" ("Spatiotemporal Contributions to the Linguistic Prehistory of Fennoscandia") is an interdisciplinary study of the linguistic prehistory of Northern Europe chiefly in the Iron Age (ca. 700 BC―AD 1200), but also to some extent in the Bronze Age (ca. 1700―700 BC) and the Early Finnish Middle Ages (ca. AD 1200―1323). The disciplines represented in this study are Germanistics, Nordistics, Finnougristics, history and archaeology. The language-forms studied are Proto-Germanic, Proto-Scandinavian, Proto-Finnic and Proto-Sami. This dissertation uses historical-comparative linguistics and especially loanword study to examine the relative and absolute chronology of the sound changes that have taken place in the proto-forms of the Germanic, Finnic and Samic languages. Phonetic history is the basis of historical linguistics studying the diachronic development of languages. To my knowledge, this study is the first in the history of the disciplines mentioned above to examine the systematic dating of the phonetic development of these proto-languages in relation to each other. In addition to the dating and relating of the phonetic development of the proto-languages, I study Fennoscandian toponyms. The oldest datable and etymologizable place-names throw new light on the ethnic history and history of settlement of Fennoscandia. For instance, I deal with the etymology of the following place-names: Ahvenanmaa/Åland, Eura(joki), Inari(järvi), Kemi(joki), Kvenland, Kymi(joki), Sarsa, Satakunta, Vanaja, Vantaa and Ähtäri.

My dissertation shows that Proto-Germanic, Proto-Scandinavian, Proto-Finnic and Proto-Sami all date to different periods of the Iron Age. I argue that the present study along with my earlier published research also proves that a (West-)Uralic language – the pre-form of the Finnic and Samic languages – was spoken in the region of the present-day Finland in the Bronze Age, but not earlier than that. In the centuries before the Common Era, Proto-Sami was spoken in the whole region of what is now called Finland, excluding Lapland. At the beginning of the Common Era, Proto-Sami was spoken in the whole region of Finland, including Southern Finland, from where the Sami idiom first began to recede. An archaic (Northwest-)Indo-European language and a subsequently extinct Paleo-European language were likely spoken in what is now called Finland and Estonia, when the linguistic ancestors of the Finns and the Sami arrived in the eastern and northern Baltic Sea region from the Volga-Kama region probably at the beginning of the Bronze Age. For example, the names Suomi ʻFinlandʼ and Viro ʻEstoniaʼ are likely to have been borrowed from the Indo-European idiom in question. (Proto-)Germanic waves of influence have come from Scandinavia to Finland since the Bronze Age. A considerable part of the Finnic and Samic vocabulary is indeed Germanic loanwords of different ages which form strata in these languages. Besides mere etymological research, these numerous Germanic loanwords make it possible to relate to each other the temporal development of the language-forms that have been in contact with each other. That is what I have done in my extensive dissertation, which attempts to be both a detailed and a holistic treatise.