Indigenous medicine – a fusion of ritual and remedy 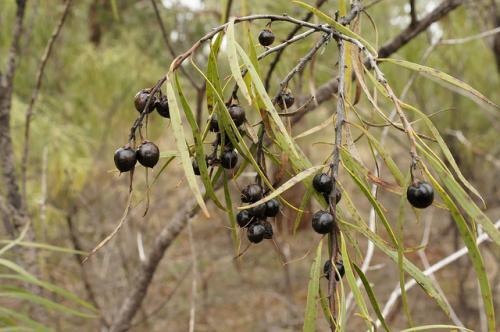 The smoke from burning emu bush was used by Indigenous healers for a number of different rituals. Tony Rodd/Flickr, CC BY-NC-SA
In traditional Indigenous Australian society, healers used plants in tandem with precise ritual. Thousands of years later, we're beginning to understand the science underlying these medicines.
A variety of plant species were used in "smoking ceremonies", where the aim was usually to produce a wet steamy smoke. This was inhaled or exposed to certain body parts as part of a healing ceremony.

Plants could also be made into a poultice using animal fats for topical treatment of a variety of skin ailments. Others were chewed, with some kept in a bolus in the mouth over many hours.

Australia has an abundance of endemic aromatic plants which yield high levels of essential oil. Even though Indigenous Australians didn't have the technology to extract essential oils via hydrodistillation, particular properties of aromatic plants in various healing methods, such as smoking ceremonies, were widely used.

Importantly, Aborigines were hunter gatherers – not cultivators – so there was little intentional interference with natural selection of native plants. The extreme chemovariability within and between species of aromatic Australian plants must be seen within this context.

Eremophila is 'number one'

Eremophila species were regarded by many Indigenous groups as their "number one medicine".

Most Eremophila species have characteristic smells which were key to their selection by Indigenous healers. In such cases, therapeutic activity was probably partly mediated by small volatile compounds (the ones responsible for smell), and Indigenous informants have told my research team that they select for the most aromatic specimens when foraging for medicines.

The leaves of the emu bush (E. longifolia) in particular were placed on hot embers for traditional therapeutic use. The resultant wet steamy smoke possibly inhibited bacterial or fungal pathogens, as well as providing a stimulus for milk let-down in women after childbirth.

The same smoking procedure was used to prepare surgical tools for circumcision. This was no doubt for sterilisation, and was conceptualised as a type of purification ritual. In such fumigation rituals, the compound (-)-genifuranal found by us in smoke condensates in laboratory simulations may have acted as an antibacterial.

E. longifolia. Bill & Mark Bell/Flickr, CC BY-NC-SA
Pittosporum angustifolium – also known as "Gumby Gumby" – was involved in a significant number of traditional medicinal applications. The most common of these were related to treatment of coughs and colds and eczema, and for lactagogue (milk let-down) activity.

Volatiles from Gumby Gumby have structural similarities to compounds identified in mother-infant bonding (including acetic acid decyl ester or 1-dodecanol, if you'd like more detail).

Perhaps these compounds were traditionally involved as a lactagogue, particularly because the leaves were used in heating as a compress and to fumigate a nursing woman's breasts.

A well-known natural product success story in Australia is the development and commercialisation of Duboisia species alkaloids as stomach relaxants to treat motion sickness and as antispasmodics.

In Indigenous medicine, the lesser-known species D. hopwoodii was not used for such purposes. Instead, it was called "pituri", made into a ball, chewed as needed for the nicotine it released (as a kind of natural tobacco) and placed behind the ear when not in use.

Indeed, pituri from New South Wales and Queensland is considered by some to be the most highly valued trading commodity in traditional Indigenous commerce.

P. angustifolium. Mark Marathon/Wikimedia Commons, CC BY-SA
Perhaps the most important development from a commercial perspective is the essential oil from Melaleuca alternifolia – commonly known as tea tree – which in recent times has spawned an industry of global proportions.

A paperbark shrub, tea tree's native habitats are swampy coastal regions of northern NSW. The local Bundjalung tribe is reputed to have inhaled vapours from heated leaves to treat coughs and colds, and also applied a poultice from the leaves topically to treat wounds and infections.

With the wealth of potentially therapeutic natural products available from Australian or Oceanic flora, it is surprising that such a small number of these have found their way into the global or national market.

Indeed the utilisation of such products in the wider community could be seen as a way to preserve the cultural heritage of Indigenous people, while also providing an improved range of health care products to the wider society.