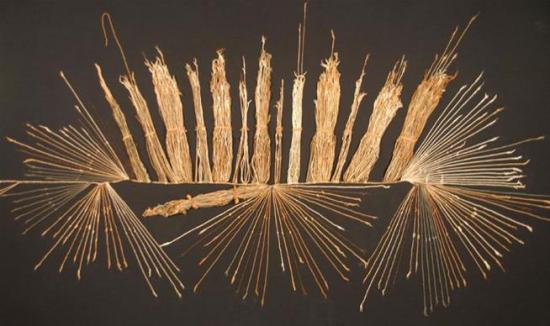 Archaeologist Gary Urton has established a database of all 870 or so known khipus and has helped record info on about two-thirds of them, from configurations and colors to numerical indicators.   (Gary Urton & Carrie Brezine/Khipu Database Project/Harvard University)

When archaeologists unearthed nearly 30 "talking knots" at the archaeological complex of Incahuasi in Peru in 2014, the 500-year-old bounty was notable because the knots, called khipus, had only previously been documented in graves, reported Discovery at the time. This left scientists little to go on aside from the basic math that could be performed using the knots placed along the cotton or woolen cords. But this Incahuasi batch was found alongside foods such as corn, beans, and peppers, suggesting that they were used for record-keeping. Archaeological conservator Patricia Landa has been painstakingly cleaning and untangling the Inca tools in the hopes that actual context may help researchers read more than just numbers, reports the New York Times.

Khipus consist of several strings (sometimes as many as 2,000) hanging from a main cord, typically made from llama or alpaca hair, with knots in certain locations and styles. Even the string itself can be differently colored and twisted, and is laid out in a base-10 positional system that produced highly complex record-keeping. In fact some 1,500 units of information can be displayed using khipus, reports Asian Scientist Magazine, compared to the fewer than 800 contained in Egyptian hieroglyphs. The ledgers are thought to have helped track anything from taxes to military organization. "We can look at how the chili pepper khipu differs from the peanut khipu and from the corn khipu in terms of their color and other characteristics and we can build up a kind of sign vocabulary of how they were signifying this or that thing in their world," leading khipu expert Gary Urton, who runs the Khipu Database Project at Harvard, tells the Times. "It’s tremendously exciting."