Dr. Fie spoke on the topic, “Evidence for Early Pipemaking in Illinois during the Middle Woodland Period (50 BC-400 AD).” She explained, “Recent investigations near Sterling, Ill., document the presence of an important pipestone source utilized during the Middle Woodland period. Pipes and other objects made from this Sterling pipestone provide intriguing evidence of exchange relations throughout the Midwest, including with the builders of the large earthwork complex of western Ohio.”

The prehistory of interest in this part of the country began around 1650AD, and populations began moving toward villages or horticultural-based societies, growing corn, beans and squash. By 1600 AD, they were starting to develop competition. They engaged in long-distance trade and ceremonies.

The Archaic period (circa 800-100AD) is the earliest period for which pipes are documented. This period is associated with catlinite, or materials used in pipe ceremonies. The Middle Woodland pipes show a platform style; some were effigy or animal forms, also tube pipes.

The Hopewell Interactive Sphere is a very challenging concept. It refers to a relationship between many different cultures of the Eastern U.S. Between Minnesota and Florida, you have many different groups developing their own cultures, ceremonies, styles and tool use.

The mound builders produced some elaborate artifacts, ceremonies and death uses. It was also a dynamic living interaction. While it may have been ideology, it also had some important ceremonial and social aspects to it. Hopewell is a relationship of interaction between these different culture groups, and it happened during the Middle Woodland window. Populations used indigenous plants. Mound builders used ceramics, made spears and other tools and weapons. There was a group cooperation.

We are situated in the Havana culture area. The other major area is Scioto in Ohio. Each of these areas exhibited interest in raw materials and activities. Some of the materials are crystal, mica, quartz from the Great Lakes area, obsidian from Yellowstone Park, and galena from northwest Illinois.

There were some 300 pipe-producing sites in Ohio. They were transporting this from Yellowstone Park all the way to Ohio. One small pipe sits in the palm of your hand; one platform pipe from a mound in Illinois is in the form of a beaver, with pearl eyes and real beaver teeth. The Hopewell pipes are very interesting because they are more widespread. In Illinois there are more than 250 pipe fragment areas known. We can look at patterns of interaction because they are associated with this development. They are most common in the north with Hopewell sites. The best known are two sites in Ohio.

Tremper is an early site excavated by William Mills in 1915 that consists of an earthwork mound built in a circle. There is an irregularly-shaped mound in the middle of it. This is a structure of several different rooms, and individuals were processed through this room. They were charnel houses that might take years to process. Bodies were burned. This particular mound was one of the earliest Hopewell earth works circa 50 BC-100 AD. It contains a “Great Cache” of more than 500 objects, including beads, gorgets and boat shaped objects of copper; mica, stone earspools, quartz crystal,, galena; ornaments made from animal and human jaws; woven textiles; and fragments from 1567 plain and effigy pipes.

During the course of the excavation, researchers uncovered the remains of about 150 pipes. The challenge is that they were all broken — actually smashed — killed. They were mixed with other materials including copper and mica. Instead of burying an individual with material, they were processing people through the charnel house, and objects were being documented; over time, you would see more than 156. The different kinds of pipes included tube and handle pipes, reminiscent of some of these other Woodland styles.

Plain platform pipes have different sizes. Some were animal or effigy pipes. Most of these occurred with the second cache. They were not killed but put there when the mound was built. Only a small number were restored; several different predatory birds were depicted. They were quite tiny and fit in your hand.

Another find was a mound city in Ohio, located near Chillicothe. It has an earth wall 13 acres in extent. Inside, there are mounds, many of which have charnel houses. This site was dug back in 1846 by Squier and Davis and has pipes that were smashed. Most of them have the same animals represented. Squier and Davis found fragments of 184 pipes, which were sold to the Blackmore Museum in England and are now at the British Museum. These contained many of the same animals and birds as the Tremper caches, but these were not as well made.

What about transportation? We have focused on the objects but not how they were created and moved. How were they getting the pipestone? The early literature on Illinois prehistory recognizes Illinois as one of the most important areas for this Hopewell phenomenon, and one of the earliest objects we see in Illinois is pipes. But for caches, we tend to focus on Ohio. There is a pipestone location in Ohio across the river from Tremper, so we assume it was floated across the river. Different archaeologists over the last 30 years have built models around these assumptions, like the transaction idea. They talk about these mound cities, but it is all associated with economics.

Another economic idea is that the most pipe production would happen near the source of manufacture. You would think that the area around Scioto would be the source; these are production areas. But that is wrong because this is not economic behavior. This is burial activity in charnel houses over furnaces. These pipes did not come to be here in a day or a week — but a generation of people buried their dead and left their pipes in that site. So it is a cumulative function vs. a distribution system. 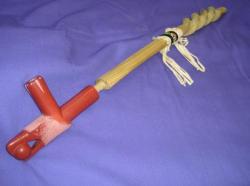