Exploration into the antiquity of Siirt’s Cattepe village in Turkey’s southeast have provided for valuable glimpses into the area’s colorful historical fabric, yet as part of the lead up to the opening of the Ilısu dam, where the archeological site is located, excavations have come to an end. 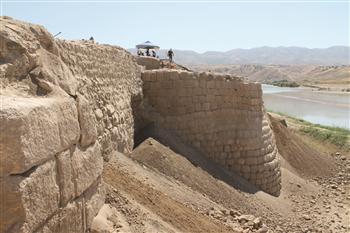 The last border castle of the late Roman era in the east could remain under water next year when the dam opens, according to officials. AA Photo

Excavations of an archaeological site located on the Ilısu dam construction site have ceased after four years of continuous efforts to unearth items significant to antiquity of the surrounding region, the closure coming in preparation for the official opening of the dam next year. A castle and a port that were deemed to have been built in the late Roman era were uncovered in the excavation, which were carried out in the southeastern province of Siirt’s Çattepe village, under the leadership of Ege University Faculty member, Ass. Prof. Haluk Sağlamtimur.

Artifacts found in the castle and port have been placed on display at museums in Mardin, Diyarbakır and Batman.

He said that the Botan Valley was examined in detail in this project, and 38 settlements from various eras had been discovered. He continued with the following:

“In 2000, the Middle East Technical University (ODTÜ) and the German Archaeological Institute carry out research among settlements in the region, especially in the Çattepe tumulus. In light of data that was obtained, excavation works in the area recommenced in 2009. We would like to have continued the excavation project however given the Ilısu dam’s construction will be complete and full with water in the next few years it was not possible. The last border castle of the late Roman era in the east could remain under water next year. The castle and tumulus will remain 70-80 meter under water. The castle is in this tumulus. It is very hard to uncover the castle completely. We started excavating the Roman walls around it. We found the entrance of the castle in the Tigris River side. The entrance to the castle was possible with a suspension bridge. There are also findings from 4,000 B.C. in the tumulus. The walls of the castle, which was constructed in the late Roman – early Byzantium era have partially remained intact.”

Sağlamtimur said that they had also found other artifacts from Parts and Sassanians in the south of the Botan Valley and through the Tigris, adding, “There is also Bezabde castle, which was built relatively recently and is similar to the late Roman castle in Çattepe. All these Roman castles are in the western part of the water system.”

He said that the thickness of the walls in some parts of the castle were 2.5 meters and made out of black basalt stones, coming across information during its excavation that the castle had been restored in different eras.

Touching on the port that was discovered, which is mentioned in some Arabic documents in the Middle Ages, Sağlamtimur said it was found on the coast of the Tigris River and they could only reach it way of 23-step stone stairs. “We understand from ancient sources and Arab geographers that it was a port.”

When they had come to the region to commence with the excavations, according to Sağlamtimur, he and his team had stumbled on 69 partially abandoned houses on the tumulus: “After the ministry confiscated these houses, we demolished some of the houses and continued excavating. We would wish that our work could have gone for much longer than it did. 90-100 years are not enough to sufficiently work on such a tumulus. But the data we have provide insight crucial to the region’s history.”