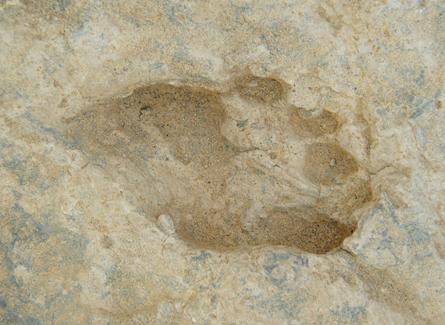 A new analysis of 1.5-million-year-old fossil footprints uncovered at Kenya’s Ileret site suggests that they were made by a human ancestor with a gait different than that of modern humans.Courtesy of Matthew Bennett/Bournemouth Univ.

To wit, 1.5 million-year-old footprints excavated in Africa, initially thought to reflect a thoroughly modern walking style, were instead made by individuals that walked differently than people today do, researchers reported April 13 at the annual meeting of the American Association of Physical Anthropologists. And findings presented April 12 at the meeting revealed the surprisingly apelike qualities of foot fossils from a 2 million-year-old species that some researchers regard as the root of the Homo genus.

These reports come on the heels of evidence that a previously unknown member of the human evolutionary family 3.4 million years ago possessed a gorillalike grasping big toe and an ungainly stride (SN Online: 3/28/12).

Depth measurements of the African footprints, discovered at Kenya’s Ileret site, differ at 10 landmarks from the footprints of people who live in that area today, said graduate student Kevin Hatala of George Washington University in Washington, D.C.

“We can infer that the ancient Ileret individuals had a normal, functional gait, but they may have walked differently than we do,” Hatala said. For now, it’s uncertain just how these hominids walked and whether they belonged to Homo erectus, a possibly direct human ancestor, or to the side-branch species Paranthropus boisei.

Technologies that produce 3D images of footprints preserved in different types of soil should soon yield insights into how hominids walked at Ileret and at other ancient sites, commented graduate student Sarita Morse of the University of Liverpool in England.

Hatala and his colleagues compared five preserved Ileret footprints to those of 38 Daasanach herders in Kenya, none of whom wear shoes. Participants walked across a pressure pad before walking across moistened Ileret soil that approximated the conditions under which the ancient footprints were made. Pressure measurements at 10 spots across the bottom of the foot closely corresponded to depth measurements at the same spots on volunteers’ footprints.

Disparities in depth measurements between Daasanach and ancient Ileret footprints signaled that the hominids walked unlike people today do.

Other comparisons to Daasanach footprints indicated that two sets of Ileret tracks were made by individuals who were walking, not running, and who stood about 5 feet, 6 inches tall and weighed 110 pounds. That’s in the general size range of Daasanach people today.

“This is a really weird foot,” DeSilva said. “Diversity in upright stances must have extended for a long time during hominid evolution.”