‘Nannangadies' (earthen burial urns) unearthed at many places throw light on the rich heritage of clan-based societies in the Megalithic period. 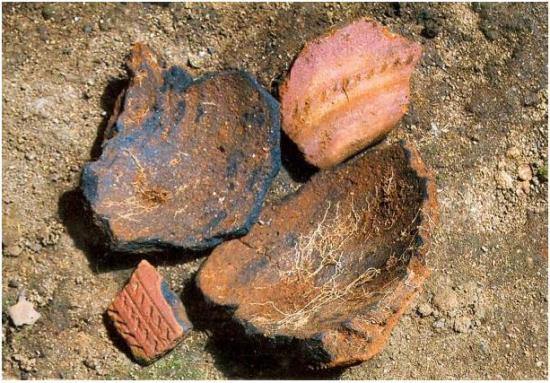 The remains of an earthen burial urn (nannangady) unearthed at Anappara in Anakkara village of Idukki district. The bright colours of black and red are unique - the patterns having similarity only with such findings in Indonesia.

However, serious archaeological studies have not been taken up as such findings are unearthed accidentally by local people or farm workers, said T. Rajesh, who did extensive research on the history of Idukki district and its early settlers for his work Idukki Charithrarekhakal. In the absence of preservation steps, the urns and the metallic items found inside them have been destroyed.

The findings are evidence to the existence of a clan-based society in the Megalithic period in the High Ranges of Idukki district. Researchers have found evidence of settlers near the rock mountains at Anappara in Anakkara village, he said. Heavy man-made granite structures (‘veerakkallu') were found at Anappara, Adayalakkallu and many other areas. Veerakkallu is a marked burial place of warriors in the pre-historic era. These urns and granite structures are the remains of one of the earliest known inhabitants and are scattered at various places, which are now facing increasing threat of destruction, he said.

The recorded history of unearthing of the first burial urn was at Chakramudy when the first survey of erstwhile Travancore was conducted by a team of the Madras Army in 1817. This was followed by many such findings at various places in the High Ranges.

Mr Rajesh said there was need to identify places of historical importance in Idukki and efforts should be taken to conserve them.

In spite of individual efforts, such findings are often destroyed owing to lack of awareness among the people. Historian Rajan Gurukkal said the burial urns were unique remains of a clan-based society and were the second burial place (where the mortal remains of a body were buried) of a chieftain or a clan leader. The furnaces near such burial sites are indicators of primitive moulding of iron metals that were excavated from inside the urns along with small earthen pots.

He said separate archaeological studies had not been taken up in the district other than the one in entire South India, including Thrissur, Kozhikode, Kannur and Kasaragod. He said earthen urns with beautiful decorations are in bright colours of black and red. These are unique in its pattern and bear similarity only with the Indonesian findings. Though, burial urns had been unearthed the world over, the unique pattern of the findings in Idukki should prompt more studies, he said.

Carbon-dating shows that the burial urns represent a period from 1050 B.C. to 3 A.D. He said in Karnataka and Tamil Nadu, such historical objects are protected scientifically and excavations by experts provide insight into such findings.

The Idukki district panchayat had documented the history of the district as part of its efforts to protect the cultural life and historical evidence beginning from the Megalithic period. Co-ordinator of the project E.J. Joseph said the team members travelled far and wide and it was found that the evidence of the Megalithic period faced increasing threat in the absence of effective protection over the years. It was due to the lack of serious archaeological intervention, he said.