Researchers dig for clues of early life at Idaho Falls

Before Idaho National Laboratory existed, before the vast fields of potatoes, the key feature of eastern Idaho's economy was the Big Southern Butte.

For thousands of years, archaeologists say, nomadic tribes made regular trips to the butte to mine its deep deposits of obsidian — a black volcanic glass that forms sharp edges when broken. The tribesmen took full advantage of this phenomenon and shaped obsidian into all manner of tools and weapons. 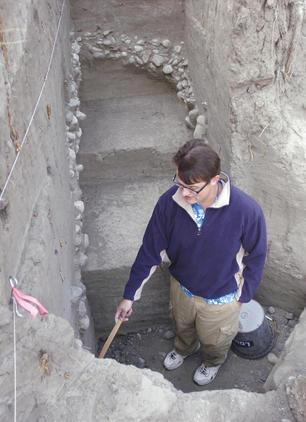 Associated Press / Archaeologists have found artifacts that they believe could be as old as 10,000 years.

Through time, eastern Idaho's abundance of obsidian grew famous, and the tribes began to trade tools and weapons formed from it as something of a currency. Evidence of their activity is littered about the INL site in the form of broken obsidian flakes and, sometimes, fully formed spear and arrow tips.

But the question remains: Just how old are the oldest artifacts that have been found in the area?

For the past two summers, an INL archaeologist and a graduate student have been digging — literally — for answers to that question. Their excavation site — a tiered hole on the bank of the Lost River that measures about 8 feet at its deepest — is the first archaeological dig on the INL site born purely of a push to research the land's history.

For years, archaeologists have drooled over the promise of what lies just beneath the surface of the INL site. It's not just the fact that millions of obsidian chunks are strewn across the landscape. Or that, thousands of years ago, the climate of eastern Idaho made the INL site an extremely habitable place in certain seasons.

Almost as important is the fact that, for the past 60 years, most of the site has remained virtually untouched by human hands.

"The INL site is like a treasure trove because, yeah, it's been protected by the government since the 1940s," Texas A&M student Josh Keene said. "It's a really, really ideal place to work."

As Keene and his cohort, Clayton Marler, wrap up this year's work at the dig, Keene suspects some of the artifacts they've unearthed are as old as 10,000 years. That's an impressive number, no doubt, but they have yet to find what could be called the Holy Grail of archaeology in the Americas: evidence of human life that predates the so-called Clovis era.

Archaeological orthodoxy long held that the 13,000-year-old Clovis era — named for a dig near Clovis, N.M. — represented the earliest appearance of humans in either North or South America. That began to change when archaeologists dug up human artifacts in southern Chile that some believe predate the Clovis era.

Since those discoveries of the late 1990s, other digs thought to contain pre-Clovis artifacts have begun popping up around the Americas. Keene said the archaeological community's increasing acceptance of the theory that humans could have arrived in the Americas as early as 15,000 or 16,000 years ago has led some to revisit Clovis-era sites.

"Now, basically, people have more open minds about it," he said. "People are also more accepting of people publishing pre-Clovis stuff. Whereas in the past, a lot of the stuff, they just blew it off without thinking about it."

At their dig on the banks of the dried-up Lost River, Keene and Marler found thousands of arrow points, animal bones and fire-cracked rocks in the first 3 to 6 feet of excavation. They then hit a layer of stones called a "cobble layer" that contains artifacts perhaps as old as 10,000 years. They went deeper into older layers, curious of whether they'd find any evidence of pre-Clovis human life at the site.

"The artifacts stop at the cobble layer," Keene said. "Underneath it is nothing. It's a really stark contrast."

The fact that Keene and Marler haven't found any pre-Clovis evidence of humans at their dig hasn't dampened their enthusiasm for it. Keene said he eventually wants to return to the Intermountain West to continue with similar digs.

Marler said the fact that he's been able to focus on simply following the traces of the area's earliest humans has been reward enough.

"This has been a blast the last couple of summers," he said.