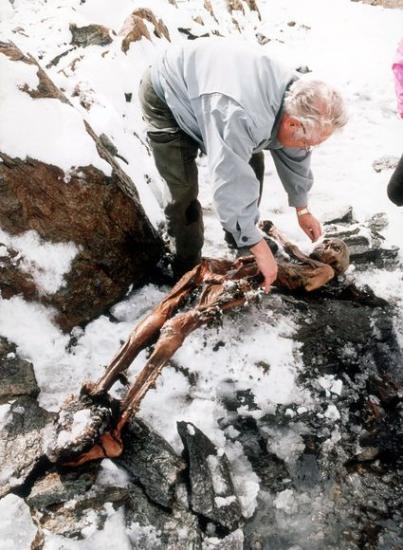 The 5,000-year-old mummy known as the Iceman was found in the Italian Alps in 1991. Photograph from Vienna Report Agency/Sygma/Corbis

Hours before he died, "Ötzi" the Iceman gorged on the fatty meat of a wild goat, according to a new analysis of the famous mummy's stomach contents.

The frozen body of the Copper Age hunter was discovered in 1991 in the Alps of northern Italy, where he died some 5,000 years ago.

The circumstances surrounding Ötzi's death are not fully known, but the most popular theory—based in part on the discovery of an arrowhead in his back—is that he was murdered by other hunters while fleeing through the mountains.

Scientists previously analyzed the contents of Ötzi's lower intestine and determined that he ate a meal of grains along with possibly cooked red deer and goat meat up to 30 hours before his death.

But attempts using an endoscopic tool to sample Ötzi's stomach were unsuccessful.

The reason for the failure became clear in 2009, when scientists studying CAT scans of Ötzi discovered that the Iceman's stomach had shifted upward after death, to where the lower part of his lungs would normally be.

"Why it moved upward, we don't know," said Frank Maixner, a microbiologist at the Institute for Mummies and the Iceman in Bolzano, Italy, who was involved in the new investigation.

The team found the stomach by examining other associated organs, which had maintained their relative positions to one another when they shifted.

The team found gallstones in the gall bladder, for instance, and from there could identify the stomach.

As a result of the natural mummification process, Ötzi's stomach had shrunk considerably. But the researchers were able to get sample of its contents, which—like the intestines—contained evidence of meat and wheat grains.

What's more, the state of the partially digested food suggests the Iceman ate a substantial meal less than two hours before his death.

"The stomach content is yellowish to brownish colored and mushy, with some bigger pieces of meat and grain," Maixner said.

DNA analysis of the meat showed that it came from an ibex, a wild goat species whose males have large, backward-curving horns. Ibex would have been much more common in Ötzi's day and would have been a good source of meat for hunters.

The animals are usually skittish around humans and will flee at the first opportunity, but a skilled hunter can creep up on one under the right circumstances.

For example, "during certain periods when the males are fighting each other, you can get as close as 20 to 50 meters [65 to 160 feet]," Maixner said.

According to past studies, such a distance would have been just within range of the bow and arrows that were found with Ötzi, he added.

It's unclear if the ibex meat was cooked, but it's possible that it was, especially since ash particles associated with other meals, possibly from cooking fires, were found in Ötzi's lower intestine, Maixner said.

Still, strands of animal hair and fly parts also found in Ötzi's stomach suggest the Iceman wasn't overly concerned with cleaning the meat before he ate it.

"It wasn't the most hygienic of meals," Maixner said.

The new Iceman research was presented at the 7th World Congress on Mummy Studies in San Diego, California, earlier this month.