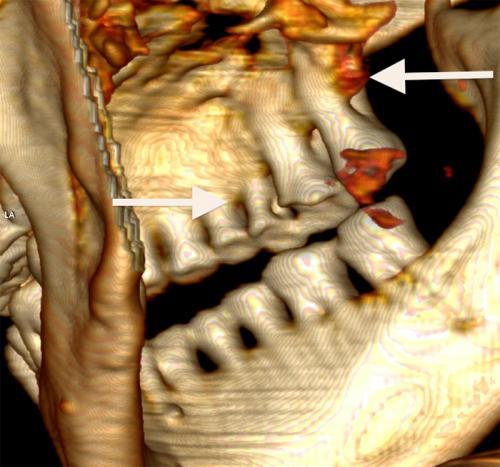 This is the view of the right side of the rows of teeth (3D reconstruction) -- arrow pointing right: deep carious lesions, arrow pointing left: severe bone loss around the molars Credit: University of Zurich

For the first time, researchers from the Centre for Evolutionary Medicine at the University of Zurich together with colleagues abroad have been able to provide evidence of periodontitis, tooth decay and accident-related dental damage in the ice mummy Ötzi. The latest scientific findings provide interesting information on the dietary patterns of the Neolithic Iceman and on the evolution of medically significant oral pathologies.

The Neolithic mummy Ötzi (approximately 3300 BC) displays an astoundingly large number of oral diseases and dentition problems that are still widespread today. As Prof. Frank Rühli, head of the study, explains, Ötzi suffered from heavy dental abrasions, had several carious lesions – some severe – and had mechanical trauma to one of his front teeth which was probably due to an accident.

Although research has been underway on this important mummy for over 20 years now, the teeth had scarcely been examined. Dentist Roger Seiler from the Centre for Evolutionary Medicine at the University of Zurich has now examined Ötzi's teeth based on the latest computer tomography data and found that: "The loss of the periodontium has always been a very common disease, as the discovery of Stone Age skulls and the examination of Egyptian mummies has shown. Ötzi allows us an especially good insight into such an early stage of this disease", explains Seiler. He specializes in examining dental pathologies in earlier eras. 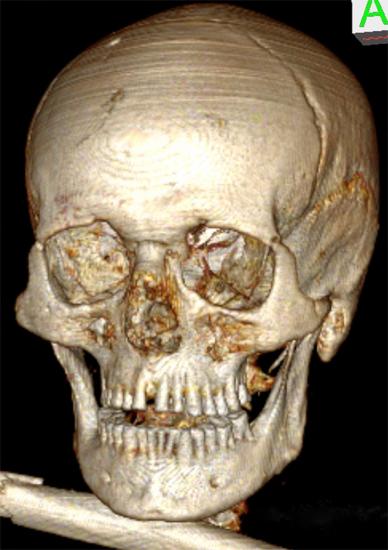 This is the skull of the Iceman seen from the front. The genetic increased distance between the central front teeth as well as the severe dental abrasion can be seen, which led to a loss of more than half of the crowns in the front. Credit: University of Zurich

The three-dimensional computer tomography reconstructions give an insight into the oral cavity of the Iceman and show how severely he was suffering from advanced periodontitis. Particularly in the area of the rear molars, Seiler found loss of the periodontal supporting tissue that almost extended to the tip of the root. While Ötzi is scarcely likely to have cleaned his teeth, his abrasive diet contributed significantly to a process of self-cleaning. Nowadays periodontitis is connected to cardiovascular diseases. Interestingly, the Iceman also displays vascular calcification, for which – like in the case of the periodontitis – mainly his genetic make-up was responsible.

The fact that the Iceman suffered from tooth decay is attributable to his eating more and more starchy foods such as bread and cereal porridge which were consumed more commonly in the Neolithic period because of the rise of agriculture. In addition, the food was very abrasive because of contaminants and the rub-off from the quern, as is demonstrated by the Iceman's abraded teeth. His accident-related dental damage and his other injuries testify to his troubled life at that time. One front tooth has suffered mechanical trauma – the discoloration is still clearly visible – and one molar has lost a cusp, probably from chewing on something, perhaps a small stone in the cereal porridge.