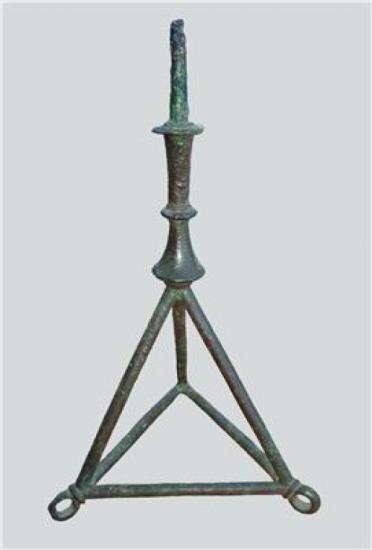 The history of medieval navigation on the Iberian peninsula is a great mystery. In the 1970s, a recreational diver found a bronze candelabra in Ibiza which Marcus H. Hermanns, a scientist from the German Archaeological Institute in Madrid, has now unveiled. It is a unique piece from the 10th century which could provide clues on sea routes in the period. Credit: Marcus H. Hermanns

The history of medieval navigation on the Iberian peninsula is a great mystery. In the 1970s, a recreational diver found a bronze candelabra in Ibiza which Marcus H. Hermanns, a scientist from the German Archaeological Institute in Madrid, has now unveiled. It is a unique piece from the 10th century which could provide clues on sea routes in the period.

He has just finished the catalogue of archaeological sites and pieces found to date underwater off the Balearic coast. "The list is part of the National R&D&I Plan to have an inventory of cultural heritage submerged under the waters of all coastal regions," Hermanns explains.

This collection has involved several years of archiving work, but also diving to check the state of shipwrecks and underwater archaeological sites. "These diving checks were made with the Spanish Guardia Civil's (Civil Guard's) Special Group for Underwater Activities (GEAS in Spanish) of the Ibiza division, and certain locations -- which are now being published -- caught our attention. We also carried out other, more detailed projects, such as analysing a bronze candelabra from the Middle Ages that is unique to the region," the archaeologist adds.

This piece, a description of which is published in the journal Archivo Español de Arqueología (Spanish Archaeology Archive), is unusual because there are not many similar models in the world. It is also unique to the Balearic region and dates back to the 10th century, an era in which marine activities on the Pityusic Islands (Ibiza and Formentera) are widely unknown.

"However, as it belongs to a private collection -- a diver in Ibiza found it in the 1970s -- it is quite a challenge gaining information about it," Hermanns remarks.

From Ibiza to the Muslim colony of Fraxinetum

Archaeologists know the location of the underwater site where the candelabra was found, so a diving check was carried out. It yielded no results, however. As the scientist explains, "the majority of the sea beds around the island, from 30 metres deep, are sandy and there is depth movement. You can be unlucky because the site could be covered on the day you are diving. We conducted several tests to find out the dynamics of the sea floor and the state the site was in."

This candelabra is noteworthy because the seaways that went along Ibiza to get to Mallorca are unknown. Moreover, on the route where it was found, several shipwrecks from the same period were also found in southern France.

"There was a link between the Iberian peninsula and the south of France at least, with a Muslim colony named Fraxinetum, according to the Latin documents preserved. There is also a group of sunken vessels that attest to it; this must have been a supply system for the colony from the south of the peninsula," the scientist claims.

Heermanns stresses that cases like these, in which objects currently held in private collections maintain well-documented account of the archaeological context in which it was found, are rare.

"There are few exceptions. This demonstrates the immense value that could be derived at institutional level, for example in diving federations, from raising awareness among recreational divers about underwater archaeology and the considerable cultural heritage to be found underwater," he emphasises. This candelabra is a unique piece, but coming from a location with no archaeological context, it is hard to imagine what use it had or any possible ritual implications.

"It belongs to the Caliphate era. We are uncertain of its symbology and precise use. For instance, it shows no traces of burning, among other reasons because it was restored differently from those found in investigations. However, it was worthwhile to make the study known to the scientific community because it might give clues on the importance of Ibiza in navigation routes," he concludes.