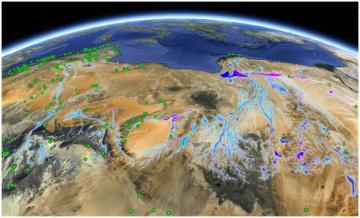 Google Earth image of North Africa encompassing Algeria, Tunisia, Libya and Egypt, with the three main rivers predicted by the researchers’ simulations shown flowing toward the Mediterranean as they would have 100,000 years ago. The green dots correspond to archaeological finds from that period. Credit:  Courtesy of Google Earth and Jorge Ramirez

Archaeologists and geologists have long hypothesized that major river systems flowed north through the Sahara Desert about 100,000 years ago. These rivers would have provided a sort of network of “green corridors” across the Sahara that early humans could have traversed as they migrated out of Africa. Ancient lake records, fossil river systems, and radioisotope data have offered evidence for the existence of flowing water in the region. Now, a team of researchers has developed a novel paleohydrogeological and hydraulic modeling approach to help confirm the existence and location of these ancient rivers. Their research complements existing evidence that all three of these rivers could have provided the necessary water and food sources for migrating humans.

Tom Coulthard and Mike Rogerson of the University of Hull in England and their colleagues started their model by simulating the yearly rainfall over the Trans-Saharan Mountains about 100,000 years ago. Then they looked at the mountainous topography at the time and simulated where monsoon rains would have struck and drained toward the Mediterranean. These watersheds are buried by sand dunes today.

The simulation, Rogerson says, relied on basic hydrological representations of the flow and spread of water. The physical limitations are governed by a balance between the rate of water flux to the coast relative to the rate of the lateral spread of water and subsequent loss to evaporation. The simulation is also extremely conservative, Rogerson says, in the sense that the team overestimated the parameters to obtain more robust probabilities for determining locations that were more humid and temperate. The model provides a geographic distribution for regions within the Sahara coupled with degrees of certainty for the presence of water, he says. Even at the most conservative rainfall amounts, the team’s simulation consistently generated three river channels, the largest of which, during peak flow, is roughly the size of the Nile during low flow periods, the team reported in PLOS One.

Modeling paleoenvironments like this could more precisely pinpoint a location for archaeological field study, says Roger Blench, a developmental anthropologist with the Kay Williamson Educational Foundation in England who wasn’t involved with the new study. However, Blench says, a modeling approach does not test hypotheses developed from in-field observations and is thus limited by its own parameters. Existing hypotheses should be backed up by satellite imagery coupled with traditional hands-on, in-field archaeological methods, he says.