Hyderabad (Inde): What lies under the Qutb Shahi tombs? 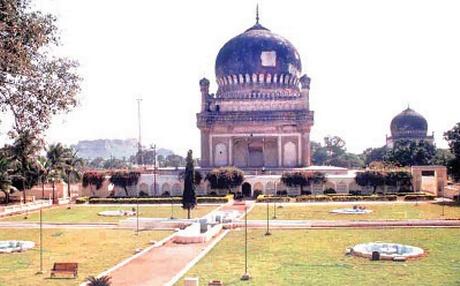 The city will soon have an active excavation site, but instead of coveted treasure, the government seems to be looking for old civic systems. The State Department of Archaeology and Museums will kick-start the exercise, but unlike their earlier attempts to dig out treasure from beneath Naubat Pahad in the city, they are on the lookout for pathways, water works and gardens underneath the Qutb Shahi Tombs premises. Once permission is granted, the department intends to carry out a test phase by conducting scientific explorations at certain spots before deciding to go ahead full steam.

The intent to study the layout comes from the State department’s propoal to restore the 49-acre complex. A memorandum of understanding was signed by the State archaeological department and the Aga Khan Trust for Culture to carry out  restoration work at the Qutb Shahi tombs complex in January this year.

The department of archaeology and museums had sought permission from the Central Advisory Board on Archaeology (CABA) to carry out excavations in and around Qutb Shahi tombs, located in Ibrahimbagh, to trace the layout of this complex. It had placed an application in September with the CABA seeking the permission for same. Officials of the department are expecting  approval anytime now.

“We placed a requisition form with the central board last month seeking the permission, which is mandatory, to carry out excavations at the Qutb Shahi tombs. We are expecting the permission by the end of October,” said KP Rao, director of the state department of archaeology and museums.

The excavations are meant to trace the layout of the royal necropolis complex that was built in the 16th century. “The project is aimed at unearthing the pathways, water works and gardens which were part of this complex. Today, most of these structures are buried under the ground,” he added.

After getting permission, a few exploratory pits, to a depth of two feet, will be dug at designated spots in the complex. “Based on the findings at these pits in providing historical evidence dating back to Qutb Shahi reign, we will decide whether or not to dig further,” he explained. The conservation is aimed at restoring the 70 deteriorating and crumbling structures on the premises. “The department of archaeology and the Aga Khan Trust for Culture are working together on all fronts. These 70 structures on the site require major conservation works that will be carried out over a 10-year period,” said Ratish Nanda, director of Aga Khan project for restoring the Qutb Shahi tombs.

However, while all basis are being covered for the restoration project, there has been no real progress in this direction due to legal issues. It is well known that the delay over the commencement of restoration work at the Qutb Shahi tombs is due to the legal tangle between the Wakf Board and the state archaeological department about the ownership of the land on which the tombs exist.

When contacted, MA Gaffar, deputy secretary of AP Wakf Board, and also holding additional charge of the chief executive officer, refused to comment over the state archaeological department’s recent moves.