Experiment with 12,500-year old deep rock mortars found at Huzuq Musa proves they could be used to turn wild barley into flour. 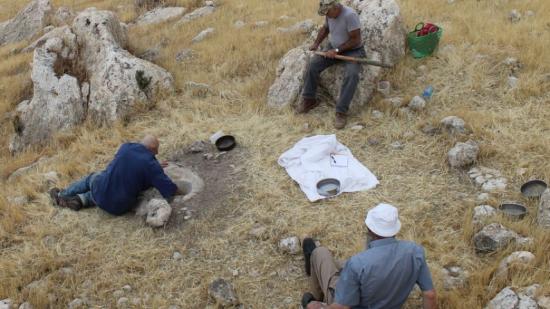 Testing how Natufian man used the 12,500-year old mortars carved into the bedrock at Huzuk Musa: They could be used to process barley into flour.Courtesy of David Eitam

An experiment in making flour using 12,500-year old stone mortars bolsters a long-held theory that Natufian prehistoric men were processing and preparing grain, apparently barley, thousands of years before they began to cultivate.
The Natufians harvested the barley almost-ripe using sickles hafted with flint blades, and processed it into edible form using stone mortars carved into bedrock or into boulders. (Necked wheat was rare in these parts during the Stone Age.) 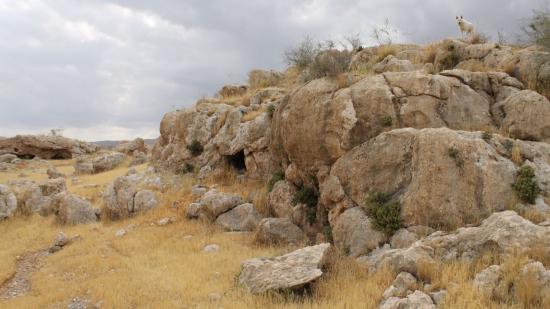 The cave in Huzuk Musa – David Eitam
This production and use of flour is believed to predate agriculture and animal domestication – which began about 10,000 years ago - by two to three thousand years, says Dr. David Eitam an independent archaeologist who initiated and directed the research. The experimental process is described in an article published in PLOS ONE.

The Natufian was a prehistoric culture that existed 15,000-11,700 years ago in the Levant. Its people are believed to be among the first humans to abandon

foraging and to settle in permanent locations. They continued to hunt for meat and gather fruits - but also began to manufacture food, a process now reconstructed by the archaeological team, working in situ at Huzuq Musa, a site where numerous such mortars and other cultural remains were found.
The earlier Natufians (about 15,000–13,500 BCE) most likely cooked the barley into porridge. Later Natufians (13,500–11,700 BCE) are believed to have formed the flour into flatbread, says the scientific team in their paper, "Experimental Barley Flour Production in 12,500-Year-Old Rock-Cut Mortars in Southwestern Asia".

The most commonly found stone tool associated with Natufian sites in Israel is stone mortars, of two basic types – deep and narrow-mouthed, and wide-mouthed, says Prof. Mordechai Kislev of Bar-Ilan University.  Both mortar types were carved right into the rock, and were not movable.
Some 216 of the deep narrow mortars, featuring a mouth roughly 20 centimeters in diameter, were found, and 53 of the wide conical mortars. The wide mortars were recovered from both early and late Natufian sites and were found directly associated with threshing floors.
The narrow conical mortars were a later development, apparently, and were recovered only from Late Natufian sites.
The question is what these mortars were used for.  Now the scientists believe they know: it was to process barley for cooking, first by "hummeling" - getting rid of the awn, the deadly barb that can cause internal bleeding and even painful death if not removed; then by removing the husks; then by pounding into groats and flour.

Hummeling simply involves pounding the barley until the awns come off. This was likely achieved using a wooden pestle in the wide-mouthed mortar. The narrow conical mortars which were used to husk and grind the hummeled grains into flour were recovered exclusively from Late Natufian sites.

The original unleavened bread
To test their theories of the Natufian lifestyle, the archaeological team set out to produce barley flour at Huzuq Musa, a Natufian site in the southern Jordan Valley, nearby the modern settlement Argaman
Huzuq Musa features 30 huts and numerous rock-cut utensils that, the scientists believe, were used to make barley meals and bread. These utensils included 36 mortars, which were found near the huts where bread would have been baked by the individual family.
These tools are the main indication for bread making in the Natufian sites: food remains aren't likely to be found after all this time.
The four large threshing floors, located 200 meters to the south of the site, were communally  operated.
The team  – David Eitam, Prof. Mordechai Kislev of Bar-Ilan University, Adiel Karty, a physicist and Prof. Ofer Bar-Yosef of Harvard University – began by harvesting wild barley, which is abundant in the Jordan Valley and in the Southern Levant. Then the scientists threshed the barley, to get rid of the stalks and chaff, by beating it on the threshing floor with a curved stick. 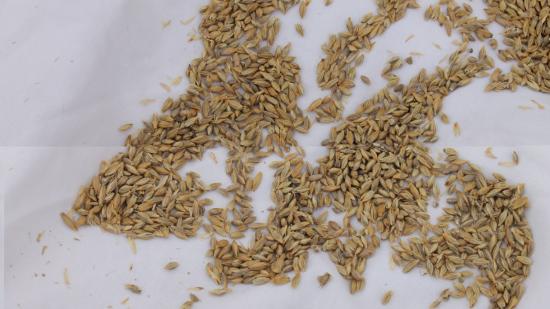 Partly peeled grains of barley – David Eitam
After hummeling the barley in the wide-mouthed mortar, the researchers separated the spikelets from the awns using a large-hole sieve. (We can assume the Natufians had sieves, as remains of fine basketry had been found in the past.) The grains were then put into the narrow conical mortar for husking and pounding into flour.

We cannot know of course if the Natufians used the instruments in the same way, but be that as it may, the process started with 24 liters of barley and produced 230 cc of fine flour.
Using the flour, Eitam and his colleagues prepared an unleavened dough which they baked covered with hot embers on a wood fire. The outcome was small, thick flat bread.
The team estimates that despite its inefficiencies, together with other foods hunted and gathered this method of barley processing could supply the estimated 100 inhabitants of Huzuq Musa with sufficient nutrition.
We cannot know for sure that Natufians baked bread. Maybe they made prehistoric pancakes, though they didn't have pots and pans to fry them. But the experiment does demonstrate that all the tools for baking bread from wild barley were at hand in the late Natufian, and that fine flour could be made.