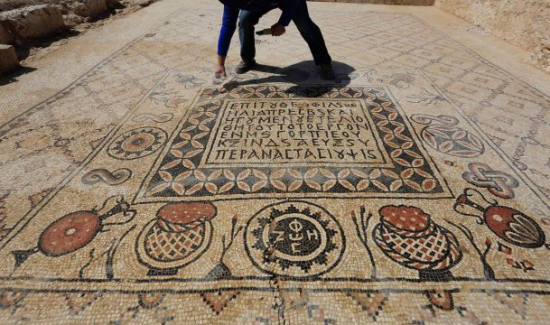 An impressive Byzantine period mosaic from the sixth century has been discovered by the Israel Antiquities Authority near the Bedouin village of Hura in the Negev. The mosaic floors were done in rare colors, shedding light on Byzantine life in southern Israel. The monastery measured 35x30 meters and included four rooms, including a prayer room and a refectory. Each room had a different design.

The excavations started a month ago, following road works in the area. The area was a designated archeological site, but the Antiquities Authority was unaware of what it contained.

Each room carries inscriptions denoting the completion of each floor, as well as a dedication to the head of the monastery. For example, one room is dedicated to Illario, with the floor completed in 596 AD. 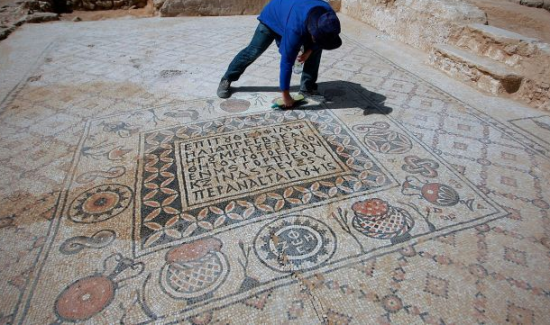 Most of the mosaic themes are commonly found, but several are unique. The prayer room floor has a clover leaf design in blue and red, associated with the Christian faith, but there are also green and yellow stones, which are less common. This probably results from the proximity of such stones, which may have come from the Judean desert. They are not found in other Byzantine ruins in Israel. Each room has well-preserved deep niches, supposedly meant to collect dirt and water used in washing the floors. 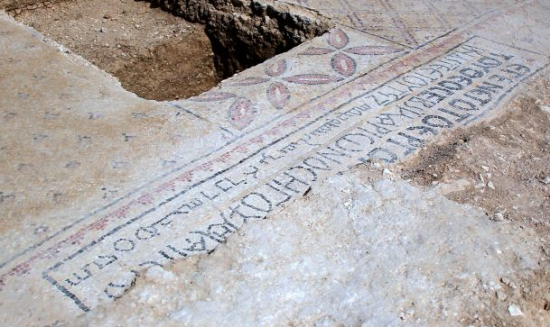 The refectory is the best decorated room, with three separate entrances. In the middle is a dedication to Father Anastasio, with depictions of baskets and food, an amphora, birds and several cross shapes. In the 520’s there was an imperial edict prohibiting mosaic crosses on floors so people would not step on them, but this floor contains several such crosses in the inscriptions. One of the archeologists explained that since this monastery lay in a remote area, the designers found indirect ways of depicting crosses, in order to contend with the prohibition. 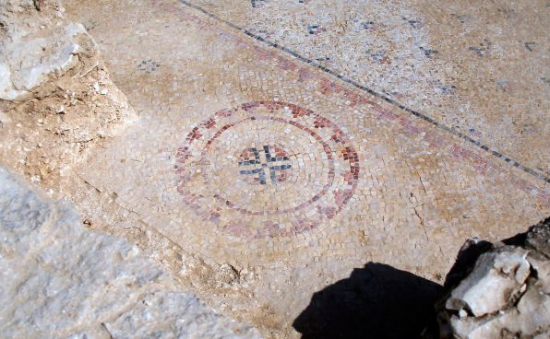 The assumption is that the building collapsed during an earthquake, but miraculously much has survived, since it was built on a flat surface. Luckily, no one built over it without knowing what lay underneath. 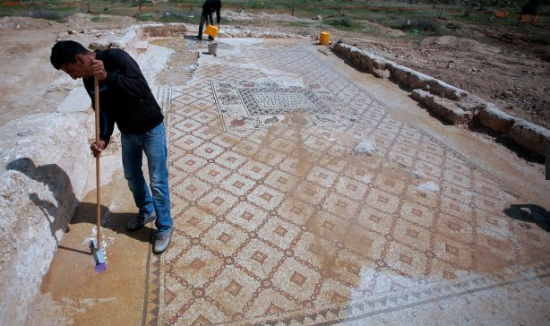 During the Byzantine period there was substantial activity in the Negev, in addition to activity in larger centers such as Jerusalem and the coastal plain. The monastery lies near the village of Hura, close to which are other ruins of a Byzantine village with three churches that have not been excavated. Much of the research of the Byzantine period has addressed more romantic, isolated monasteries in the desert, but this location is close to and probably interacted with an adjacent village, a less-known feature of such monasteries. Nearby Be’er Sheva was a large Byzantine center with impressive churches. It appears on the famous mosaic map of Palestine found in the Saint George basilica in Madaba, Jordan.

The dig also yielded pottery, including large storage vessels or amphorae and different types of jugs, cooking vessels and bowls. Coins and diverse glass items typical to the period were also found, indicating the existence of a rich culture in the area.