More than 25 years after state and local archaeologists and paleontologists excavated the Huntington Mammoth, this extraordinary find continues to produce new knowledge about Pleistocene megafauna.

According to USU Eastern Prehistoric Museum Curator of Archaeology Tim Riley, the massive amount of research performed on this specimen has yielded some of the most important information available about the species. Because the mammoth was encased in an airtight bog with unmatched preservation, scientists are still able examine both the animal's eating habits and its genetic material.

Discovered 9,000 ft above sea level in a glaciated U-shaped valley, the Huntington Mammoth lived in a conifer forest and grassland. Radio carbon dating on the mammoth shows that he most likely died about 11,020 years ago, just about the time the species disappeared.

"This was most likely one of the last of its kind," said Riley during a presentation given to celebrate the 25th anniversary of the Huntington Mammoth's discovery.

The old guy was hurt and hungry

Initial investigation of the animal's stomach contents show that fir needles were present, strange because the mammoth was a grassland grazer, not a fir and sage eater. According to Riley, this shows that he had a marginal diet at the time of his death.

Pollen samples also show that the mammoth had eaten oak and maple in his last 30 days. This suggests that the Huntington Mammoth had lived at a lower elevation before climbing significantly to either look for other mammoths, find food, or to get away from something. It is known that the specimen was suffering from a broken leg.

More recent research also shows that multiple Paleoindian archery points were found within a kilometer of where the mammoth was discovered.

"While that doesn't sound like much, that is an incredible Paleoindian site density," explained Riley. "It shows that this area was very important near the end of the Pleistocene and the beginning of Holocene."

To reflect this information, changes have take place in the mammoth's display including habitat reconstruction. The new exhibit features a natural grassland mound and a Paleoindian skeleton casting an atlatl dart at the mammoth.

While there is no direct evidence that this animal was killed by a hunter, the massive species was hunted regularly by Paleoindians.

In addition to the exhibit, recent work at McMaster University in Canada and the University of Utah has yielded the complete mitochondrial genome of the Huntington Mammoth.

"The majority of this coding was taken from our mammoth," said Riley. "The preservation has allowed for significant genetic research."

Because mitochondrial DNA is only passed down through an animal's mother, this complete genome has demonstrated that there was interbreeding between Woolly and Columbian Mammoths. 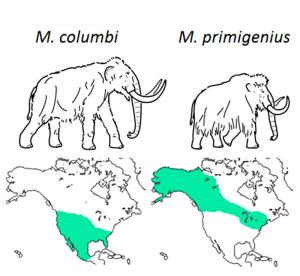 Bone structure differences typically demonstrate that the animals were completely different species. Woolly Mammoths typically lived only along the edges of glaciers while the much larger Columbian species roamed the grasslands. Because of this geographical difference, it was previously thought that no interbreeding took place.

"This genetic study shows that the species did interbreed and that one of the Huntington Mammoth's great-grandmothers was a Woolly Mammoth," said Riley.

The same group from McMaster is now working on a map of the mammoth's nuclear genome. This is much more difficult, as there is far less nuclear DNA in a given cell than mitochondrial material. Additionally, nuclear DNA strands are much longer.

"This is such a well preserved specimen that they think they can do it. They are in the process of trying and we are very hopeful that they will be successful. Then we can repopulate the Wasatch Front with mammoths," he said jokingly.

According to Riley, continued gathering of late Paleo- or Early-Archaic arrow points, show that other Pleistocene mega-fauna are available for study in Eastern Utah.

"We are hoping to make those discoveries," he said.

With a new museum in the works here in Castle Country, Riley discussed just how important the mammoth will be in a new setting.

"This mammoth is going to be the perfect bridging point between paleontology and archaeology. It is a paleontological specimen but it's at the time period where we first start to see people coming into Utah."

According to Riley, the new museum will feature a continuous exhibit which will flow from the earliest known fossils, through the end of the Pleistocene and then into archaeology.

"He will be a centerpiece at the new museum just as he is here," he said.