The human hand is a marvel of dexterity. It can thread a needle, coax intricate melodies from the keys of a piano, and create lasting works of art with a pen or a paintbrush. Many scientists have assumed that our hands evolved their distinctive proportions over millions of years of recent evolution. But a new study suggests a radically different conclusion: Some aspects of the human hand are actually anatomically primitive—more so even than that of many other apes, including our evolutionary cousin the chimpanzee. The findings have important implications for the origins of human toolmaking, as well as for what the ancestor of both humans and chimps might have looked like.

Humans and chimps diverged from a common ancestor perhaps about 7 million years ago, and their hands now look very different. We have a relatively long thumb and shorter fingers, which allows us to touch our thumbs to any point along our fingers and thus easily grasp objects. Chimps, on the other hand, have much longer fingers and shorter thumbs, perfect for swinging in trees but much less handy for precision grasping. For decades the dominant view among researchers was that the common ancestor of chimps and humans had chimplike hands, and that the human hand changed in response to the pressures of natural selection to make us better toolmakers.

But recently some researchers have begun to challenge the idea that the human hand fundamentally changed its proportions after the evolutionary split with chimps. The earliest humanmade stone tools are thought to date back 3.3 million years, but new evidence has emerged that some of the earliest members of the human line—such as the 4.4-million-year-old Ardipithecus ramidus (“Ardi”)—had hands that resembled those of modern humans rather than chimps, even though it did not make tools. And back in 2010, a team led by paleoanthropologist Sergio Almécija, now at George Washington University in Washington, D.C., began arguing that even earlier human relatives, dating to 6 million years ago—very soon after the human-chimp evolutionary split—already had humanlike hands as well. This even included the ability to press the thumb against the fingers with considerable force, a key aspect of precision gripping.

To get a grasp on what early hands really looked like, Almécija and his colleagues analyzed the thumb and finger proportions of a large number of living apes and monkeys, including modern humans. They then compared these to the hands of several extinct species of apes and early humans, including Ardi, the Neandertals, and the 2-million-year-old Australopithecus sediba from South Africa, which its discoverers controversially think might be a direct ancestor of humans. The sample also included the 25-million-year-old fossil ape known as Proconsul.

The team crunched the measurements from all these samples using sophisticated statistical methods designed to determine the course of hand evolution over time. The researchers found that the hand of the common ancestor of chimps and humans, and perhaps also earlier ape ancestors, had a relatively long thumb and shorter fingers, similar to that of humans today. (Gorillas, which spend most of their time on the ground and not in trees, have similarly shaped hands.) Thus, the human hand retains these more “primitive” proportions, whereas the elongated fingers and shorter thumbs of chimps, as well as orangutans, represent a more specialized and “derived” form ideal for life in the trees, the team reports today in Nature Communications.

Almécija says that a hand capable of precision grasping was “one of the earliest adaptations” among members of the human line, possibly because it made our ancestors better at gathering a wider variety of foods, and not originally because it made them better toolmakers. And if human hands largely retained the “primitive” state, he adds, the most important changes that led to toolmaking would have been “neurological” -- that is, the result of the enlargement and evolution of the human brain and its ability to plan ahead and better coordinate hand movements.

Almécija says that a hand capable of precision grasping was “one of the earliest adaptations” among members of the human line, possibly because it made our ancestors better at gathering a wider variety of foods, and not originally because it made them better toolmakers. And if human hands largely retained the “primitive” state, he adds, the most important changes that led to toolmaking would have been “neurological” -- that is, the result of the enlargement and evolution of the human brain and its ability to plan ahead and better coordinate hand movements.

“Their results fit very nicely with the view … that the human hand is best described as primitive,” says Tracy Kivell, an anthropologist at the University of Kent in the United Kingdom who specializes in the study of the primate hand and wrist. “It’s good to see that some of the implications of Ardi”—that the common ancestor of chimps and humans was not chimplike—“are being noticed,” adds Owen Lovejoy, an anatomist at Kent State University in Ohio and member of the team that studied this early member of the human line. Rather than being a good model for this common ancestor, Lovejoy says, today’s chimps are “highly specialized” for a fruit-eating life high up in the trees.

But the study is not likely to receive a warm welcome from researchers who think the common ancestor of chimps and humans was indeed more chimplike. The team “build[s] an evolutionary scenario based on one data point, bony proportions of hands, with the underlying assumption that they tell a story,” says Adrienne Zihlman, a primatologist at the University of California, Santa Cruz. Zihlman argues that the hands alone provide researchers with only a very limited view of what the common ancestor was like. “This paper serves as a poster child for what is wrong with a lot of work in paleoanthropology.”

The evolution of human and ape hand proportions

Human hands are distinguished from apes by possessing longer thumbs relative to fingers. However, this simple ape-human dichotomy fails to provide an adequate framework for testing competing hypotheses of human evolution and for reconstructing the morphology of the last common ancestor (LCA) of humans and chimpanzees. We inspect human and ape hand-length proportions using phylogenetically informed morphometric analyses and test alternative models of evolution along the anthropoid tree of life, including fossils like the plesiomorphic ape Proconsul heseloni and the hominins Ardipithecus ramidus and Australopithecus sediba. Our results reveal high levels of hand disparity among modern hominoids, which are explained by different evolutionary processes: autapomorphic evolution in hylobatids (extreme digital and thumb elongation), convergent adaptation between chimpanzees and orangutans (digital elongation) and comparatively little change in gorillas and hominins. The human (and australopith) high thumb-to-digits ratio required little change since the LCA, and was acquired convergently with other highly dexterous anthropoids. 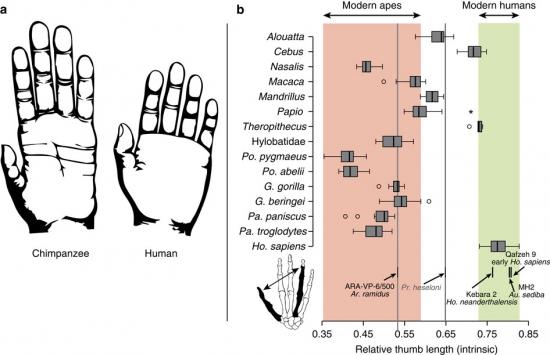