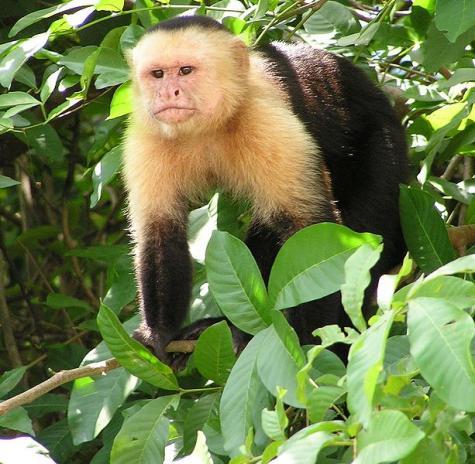 Wild Capuchin monkey (Cebus capucinus), on a tree near a river bank in the jungles of Guanacaste, Costa Rica. Image: David M. Jensen/Wikipedia.

Covert changes of mind can be discovered by tracking neural activity when subjects make decisions, researchers from New York University and Stanford University have found. Their results, which appear in the journal Current Biology, offer new insights into how we make decisions and point to innovative ways to study this process in the future.

"The methods used in this study allowed us to see the idiosyncratic nature of decision making that was inaccessible before," explains Roozbeh Kiani, an assistant professor in NYU's Center for Neural Science and the study's lead author.

Previous work on the decision-making process—a plan of action based on evidence, prior knowledge, and payoff—has been methodologically limited. In earlier studies, scientists analyzed one neuron at a time, then averaged these results across neurons to develop an understanding of this activity. However, such a measurement offers only snapshots of neurological behavior and misses the fine-scale dynamics that lead up to a decision.

In the Current Biology study, the researchers examined many neurons at once, giving them a more detailed understanding of decision making.

"Now we can look at the nuances of this dynamic and track changes over a specified period," explains Kiani. "Looking at one neuron at a time is 'noisy': results vary from trial to trial so you cannot get a clear picture of this complex activity. By recording multiple neurons at the same time, you can take out this noise and get a more robust picture of the underlying dynamics."

The researchers studied macaque monkeys, running them through a series of tasks while monitoring the animals' neuronal workings.

In the experiment, the monkeys viewed a patch of randomly moving dots on a computer screen. Following the stimulus, monkeys received a "Go" signal to report the motion direction by making an eye movement. The scientists sought to predict the monkeys' choices purely based on the recorded neural responses before the Go signal. Their model achieved highly accurate predictions.

The same model was then used to study potential dynamics of the monkeys' decision at different times before the Go signal. The scientists confirmed these predictions by stopping the decision-making process at arbitrary times and comparing the model predictions with the monkeys' actual choices.

Surprisingly, the monkeys' decisions were not always stable. Occasionally, they vacillated from one choice to another, indicating covert changes of mind during decision-making. These changes of mind closely matched the properties of human changes of mind, which were uncovered in a 2009 study. They were more frequent in uncertain conditions, more likely to correct an initial mistake, and more likely to happen earlier during a decision.

The research was supported by the Howard Hughes Medical Institute, the Air Force Research Laboratory (FA9550-07-1-0537), a Berry Postdoctoral Fellowship, and a Sloan Research Fellowship.