Human domestication of soybeans is thought to have first occurred in central China some 3,000 years ago, but archaeologists now suggest that cultures in even earlier times and in other locations adopted the legume (Glycine max).

Comparisons of 949 charred soybean samples from 22 sites in northern China, Japan and South Korea -- found in ancient households including hearths, flooring and dumping pits -- with 180 modern charred and unburned samples were detailed in the Nov. 4 edition of the online journal PLoS ONE, a publication of the Public Library of Science. The findings, say lead author Gyoung-Ah Lee, an archaeologist at the University of Oregon, add a new view to long-running assumptions about soybean domestication that had been based on genetic and historical records.

"Preserved beans have been carbonized, and that distorts the sizes," Lee said. "So we experimented with modern soybeans, charring them to compare them with historical samples. All the different sizes and shapes of soybeans may indicate different efforts in different times by different cultural groups in different areas." 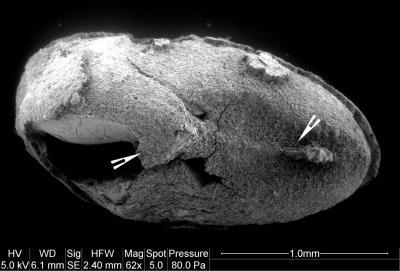 Shown is a charred soybean found at a site at Jinju, South Korea. The specimen was dated to 4,200 years ago. Credit: Courtesy of Gyoung-Ah Lee

"Soybeans appeared to be linked to humans almost as soon as villages were established in northern China," said co-author Gary Crawford, a professor of anthropology at the University of Toronto Mississauga, in a news release. "Soybean seems to be a plant that does well in human-impacted habitats. In turn, humans began to learn how tasty soybean was and how useful it was."

Today, of course, soybeans are used as livestock feed and to make cooking oil, tofu, tempeh, edamame and protein powder for human consumption.

The new archaeological evidence, Lee says, should be a springboard for archaeologists, crop scientists and plant geneticists to collaborate on understanding cultural contributions, which may lead them to better soybean characteristics. Cultural knowledge, she said, could fill in gaps that relate to domestication and genetic changes of the legume.

"I think one contribution that archaeologists can make is how peoples in ancient times contributed to our heritage of this viable crop and how we can trace their efforts and the methods to help guide us to make even better crops today," Lee said.

In Lee's homeland of South Korea, the research team uncovered evidence for a cultural selection for larger sized soybeans at 3,000 years ago. The evidence for such dating, which also surfaced in Japan, indicates that the farming of soybeans was much more widespread in times much earlier than previously assumed, researchers concluded.

Co-authors with Lee and Crawford were Li Liu of the Stanford University Archaeology Center, Yuka Sasaki of Paleo Labo Co. in Japan, and Xuexiang Chen of Shandong University in China.