Most of Asia is “a blank map, if you will, in its prehistory”, says Petraglia. Scattered fossils record the archaic peoples — Homo erectus, Neanderthals and the recently identified Denisovans — who had the continent to themselves before modern humans moved in. But few artefacts and no convincing fossils record this arrival. Researchers have mostly relied on the DNA of people today to reconstruct the ancient story.

Geneticists collected mitochondrial DNA (mtDNA) — which is inherited only from the mother — across much of Asia, focusing on isolated native groups thought to be descendants of early human settlers in their areas. They identified distinctive mtDNA variants, or haplotypes, and compared them to create a family tree of the African exodus. To date its roots and branches, they used estimates of mutation rates as a molecular clock.

The tree's root is marked by a haplotype called L3 that originated before humans left Africa; its genetic signature is found in many Africans and every non-African today. The latest readings of the molecular clock date L3 to 60,000–70,000 years ago2, suggesting that humanity left Africa a few thousand years after Toba. The three next-oldest haplotypes — immediate descendants of L3 outside Africa — are 60,000–65,000 years old. All three gave rise to multiple 'starbursts' of genetic variation, scattered all the way from Arabia to Bali. “For that to happen,” says geneticist Stephen Oppenheimer of the University of Oxford, “people would have had to move very fast, before new mutations occurred.”

The most plausible route for a rapid migration is along the coast of the Indian Ocean, which could have been followed for thousands of kilometres without the need to master new environments. By the mid-2000s, most researchers accepted the 'coastal express', as this post-Toba migration scenario is sometimes known. Later analyses of mtDNA and of the male Y chromosome suggested that the exit from Africa was even more recent, perhaps less than 60,000 years ago. And in an influential 2006 review in Science3, Mellars argued that the sparse archaeological record of Asia and Australia not only supported the genetic evidence of a rapid post-Toba migration, but showed how cultural advances could have helped to drive it.

There is no trace of any ancient beachcombers or their camps, which Mellars says is no surprise because sea-level rise since the most recent ice age has flooded the former coastline. “Your earliest sites in any area are going to be under the sea, and 20 kilometres or more out to sea,” he says.

But Mellars sees important clues further inland. The earliest artefacts from the Jurreru Valley and other sites in India and Sri Lanka are simple stone points, scrapers and cores — the lumps of rock left after points were flaked off. All could have been made by archaic humans. Later, well after Toba, they give way to much more sophisticated handiwork: small, finely worked 'microlithic' blades that might have served as arrowheads, shaped bone points, beads and pieces of ostrich eggshell adorned, in one case, with cross-hatching.

The change in the record “appears almost overnight”, Mellars says, and mirrors the transformation seen in Europe some 45,000 years ago, when modern humans arrived, bringing sophisticated tools and ornaments that outshone the cruder handiwork of the continent's resident Neanderthals. If Europe's great cultural flowering commenced with a wave of modern human immigrants, he asks, why should Asia's be any different?

Mellars suggests that the migrants carried technology from a culture known as Howiesons Poort, which flourished in southern and eastern Africa from 65,000 to 50,000 years ago. This sophisticated technology, he thinks, was key to launching modern humans out of their native continent. “Innovation would have enormously facilitated expansion eastward,” he says. 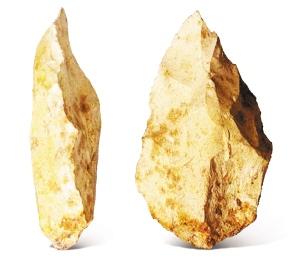 Tools such as this unfinished hand axe found at Jebel Faya on the Arabian peninsula suggest that modern humans arrived there more than 125,000 years ago.   - H.-P. UERPMANN

Critics say the theory faces a serious obstacle, however. Although the genetics suggest that the coastal express dispersed people across Asia at least 55,000 years ago, the earliest microlithic tools found so far in South Asia are no more than 40,000 years old. Mellars is unfazed by the lag, noting that sea-level rise would have flooded the coastal pioneers' earliest sites. The Asian locations with microblades should be younger, he says — because they lie well inland. “That's a totally different environment. You've got a lot of adapting to do, and you won't do it overnight.”

While Mellars was picturing a late and rapid expansion of culturally advanced people, Petraglia was digging beneath the grey ash beds in the Jurreru Valley and speculating about a very different scenario. He and his colleagues had excavated simple scrapers and cores from below the ash, dated to between about 77,000 and 74,000 years ago4. Neanderthals or other archaic humans could have made them — but, says Petraglia, “no one has ever argued for Neanderthals in India, ever”. Instead, he and his colleagues argued, the artefacts were reminiscent of ones from southern Africa, where the only toolmakers were unquestionably modern humans.

To Petraglia, the implication was clear: modern humans found their way to India before Toba blew its top. As for the microblade technologies that Mellars attributes to a wave of later migrants, Petraglia argues that a long-established population of modern humans developed the new tools on their own.

He dismisses some geneticists' conclusion that clues in modern human DNA rule out a migration from Africa to Asia any earlier than 60,000 years ago. “My issue with these guys is, what are they sampling? They're sampling modern humans that live today — a small subset of what out-of-Africa was.” The genetic signal of earlier arrivals has simply been lost, he says, as populations shifted and vanished.

Petraglia's claim intrigued at least one geneticist. Stephen Oppenheimer studies mtDNA and contributed to the coastal-express model5. In his view, the migration had to have been rapid and coastal — but not necessarily as recent as other geneticists have insisted. A clue to an earlier date, he says, comes from mtDNA studies in India. One set of variants was less diverse than expected, suggesting to him that the first modern humans in India suffered some kind of catastrophe that reduced their numbers to almost nothing.

The cause, he speculated, might have been the Toba ash cloud, which would imply that modern humans were already established in India at the time of the eruption. He was also intrigued by other hints of a pre-Toba population of modern humans in Asia — such as a foot bone from the Philippines and a skull from China — although all were of uncertain age or origin.

Oppenheimer notes that DNA is an inexact clock. He concedes that the most likely dates for the L3 haplotype — and the exit from Africa — fall after Toba. But “the logic is in the error bars”, he says. “The upper limit for the most recent confidence estimate is 79,000 years ago, which means the L3 date straddles Toba.” If DNA can't resolve the dispute, he says, the clinching evidence will have to come from archaeology.

Petraglia and his supporters say that evidence has grown much stronger in the past two years, thanks to the discoveries that put modern humans in Arabia more than 100,000 years ago. What he calls the “smoking gun” comes from Oman, where a group led by Jeffrey Rose of the University of Birmingham, UK, found 106,000-year-old stone relics that are as diagnostic of modern humans as a lost mobile phone would be today. Consisting of distinctive triangular cores and long spear points made from them, this kind of technology was first excavated in Nubia, a region in northern Sudan, at sites inhabited by modern humans. Yet here they were, more than 2,000 kilometres away, on the other side of the Red Sea6. “There's no question,” says Rose. “It's the same people.”

They reached Oman not with the aid of superior technology, Rose says, but because climate and ecosystems favoured the move. At the time, the Arabian peninsula was a moist savannah teeming with game. “The territory next door suddenly turned green and people from northeastern Africa moved in,” says Rose. “These people would have been moving into what they already knew.”

But did these early explorers press on, from Arabia into Iran and India? No, says Mellars. Theirs was a failed expansion, like one documented in Israel, where modern humans were present more than 100,000 years ago but then vanished. When the climate cooled and dried about 75,000 years ago, turning Arabia back into a desert, the Nubian pioneers either died out or retreated to Africa. “There's not a smell, not a whiff [of Nubian technologies] that has ever been detected in India,” says Mellars. “If Mike Petraglia could come to me with one of those Nubian cores and say, 'Look, we found this in India,' I would get down on my knees and say, 'Sorry, Mike, I got it wrong'.”

Even if the Nubian toolmakers did not wander farther into Asia, other ancient Arabian populations might have, Petraglia and others say. At a site in the United Arab Emirates called Jebel Faya, Simon Armitage of Royal Holloway, University of London, and his colleagues have found even older artefacts, dating to as early as 125,000 years ago and resembling objects made by modern humans in eastern Africa7.

Jebel Faya sits on a promontory jutting toward Iran, and its inhabitants could easily have pushed eastward a few thousand years later. By 110,000 years ago, ice sheets were beginning to build up far to the north and sea level was dropping, markedly narrowing the Straits of Hormuz and easing the crossing to Iran. “It's extremely plausible that a population at Faya could have moved on,” Armitage says.

But plausibility is perhaps the strongest argument that Armitage and others favouring the pre-Toba model can make. If a band of pioneers did wander from Arabia into a welcoming green Asia during the last interglacial, their tracks are faint indeed.

The pre-Toba artefacts from the Jurreru Valley look nothing like the Arabian ones, says Anthony Marks of Southern Methodist University in Dallas, Texas, who studied the Jebel Faya material. And the archaeologist who analysed the oldest relics from the Jurreru Valley and provided key support for the claim that they are the handiwork of modern humans is no longer so sure. Chris Clarkson of the University of Queensland in Brisbane, Australia, a frequent collaborator of Petraglia's, now thinks they might be the work of an unidentified population of archaic people.

Clarkson and others say it is simply too soon to know for sure whether our ancestors were in India to watch the volcanic ash rain down 74,000 years ago. Pre- or post-Toba: either scenario rests on sparse and ambiguous artefacts. “People say mute stones speak,” says Marks. “They don't. They just lie there. We're the ones who impose our views on them.”

What is needed is what archaeologists always need: more and better evidence. “We're at the tip of the iceberg, really,” says Petraglia. “We've done the best we can with a few sites.” On the Arabian Peninsula, along the coast of the Indian Ocean, and in the heart of India, archaeologists continue to search. Perhaps they will find tools clearly made by modern humans before Toba, or a coastal encampment left by later colonists, littered with microlithic blades. Or, most definitive of all, a skull entombed beneath the Toba ash, silently announcing the presence of modern humans — or ceding the ground to our archaic cousins.