The Hujiaying Site is situated at Zhangshanying town in Yanqing county, about 6 km west of the Yuhuangmiao cultural burial ground. The site extends from Song Mountain in the north to Guishui River in the south and Hujiaying village in the west. The excavation area was on a terrace, gradually sloping from north to south.

The site can be divided into two areas, namely Area I and II. Twenty grids of 10 x 10 m were set up in Area I, while Area II was situated 283 m north of it with six grids measuring 5 x 5 m.

Two large ditches were identified in the southern part of Area I and a huge sediment concentration was found in G2, which are believed to have been a river during that particular period. Most of the house foundations were scattered at the northern side of the ditches, thus living alongside the river was the living style during that period.

Most of the house foundations were semi- subterranean structures. According to their floor plans, they can be divided into three types: square, near circular and irregular in shape. The house foundations were formed by doorways, postholes and stepping floors. However, only few of them contained a stove. The doorways faced northwest, east and south, thus no distribution pattern can be attributed. For the architectural style of the stove remains, it can be divided into stone or clay stoves. Furthermore, a wall mounted clay stove was discovered in F12. The ash pits were of bag shapes with small openings and large bottoms. The openings were regular and the depth did not exceed 1.5 m for most pits.

Five types of artifacts were identified, including pottery, which formed the majority, as well as tools made of stone, bone, iron and bronze. The pottery can be divided into five different types including stem-cups, pots with angular shoulders, coarse cauldrons, coarse pottery li tripod and li tripod in Yan vessel style. Furthermore, potteries of bat, yu vessel, urn and zeng steamer were found as well. A characteristic change over time can also be observed in these vessels. For instance, in the earlier period vessels were made of coarse grained clay in brownish colour and rough technique. On the other hand, vessels of the later period were grey with regular shapes and of sophisticated wheel technique.

The different types of stone artefacts include axes, adzes, balls, scrapers and axe. Moreover, polished stone ornaments and other tools were also found.

However, only a small amount of bronzes could be found, which were arrowheads, awls and one bronze arrowhead with iron bottom. 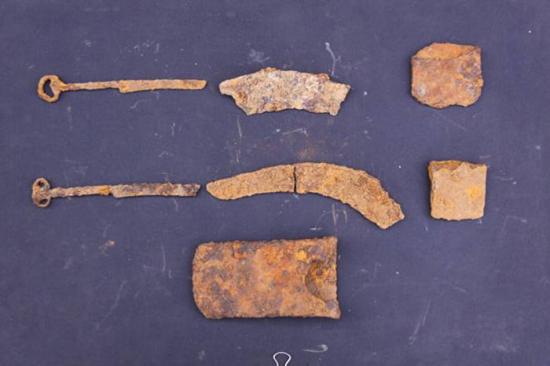 Most of the features, including house foundations, stove remains and ash pits lay within one cultural layer and belonged to the same period. Only a small number of coarse pottery cauldrons with hooked rims were identified, which form the earliest style of coarse cauldrons. Another type fine clay pot with concentric pattern inside and scratch on shoulder showed the cultural characteristic of the Late period Yuhuangmiao Culture. Brownish tripods with fingernail pattern and coarse pottery earring were also common in Yuhuangmiao Culture. The above three types of artefacts can be dated from the late Spring and Autumn Period to early Warring States Period. Other artefacts include a huge amount of brownish stem-cups and a certain number of coarse pottery stem-cups with small sand particles and tall body. In addition, a great number of coarse pottery li tripod together with stone tools was unearthed in this site. Most spindle whorls are sandy ware and have rough technique. Most pyramidalis spindle whorls were located within the features and a huge amount of stone tools were yielded. In this connection, the features can be dated from late Warring States period to late Spring and Autumn Period. Other than coarse pottery cauldron and Yan style li tripod leg from Yan state Culture, pots with angular shoulder in the Yuhuangmiao Culture and tripods were also identified. The shape of the house foundations unearthed was very different from those on the Central Plains. The site depicts a diversified cultural style due to its location at the intersection of the Central Plains and North Culture.

The significance of the Hujiaying site can be expounded in terms of its location, period and the specialties of its features and artefacts. The site itself is located at the intersection between the Grassland Culture in the North and farming Culture on the Central Plains. There were also a cultural exchange period between the North and the Central Plains in the Spring and Autumn and Warring States period of Eastern Zhou. Before this excavation, most of the archaeological remains were found in burials and the discovery of house foundations was rare in Beijing and even the northern area. The number of large scale settlement sites was also limited. The discovery of Hujiaying site not only revealed a great number of semi subterranean house foundations in different styles, it also allowed to study their architectural layout and features, which provided valuable information for understanding the living style during that particular period.

In accordance with the territory analysis, the site can be regarded as a linking area between the Grassland Culture in the North and Farming Culture in the Central China. Its features and artefacts fully illustrate a landscape with a semi nomadic settlement form in the northern nation. The Hujiaying site provides new materials for understanding of where this local group belongs to, and also the cultural exchange between the North and the South.    (Translated by Li Langlin and revised by Markus Spring)