Huari (Pérou): The life after death of dismenbered remains

In the Princess Bride, the deceased body of Westley is brought to Miracle Max in order to bring him back to life. Famously, May says ‘There’s a big difference between mostly dead and all dead. Mostly dead is slightly alive’ (Goldman 2007 from Arnold 2014). In the new issue of the Cambridge Archaeological Journal, there is a focus on this concept of being slightly alive despite being physically deceased. For those who haven’t delved into archaeological theory, this issue is discussing the concept of agency, specifically in the deceased. Agency is the capacity of an agent to act in the world. This means that individuals, groups, entities and even objects have the ability to act and change the broader world. This means that I have the capacity to change the world around me- either consciously or unconsciously. Often when we talk about this concept, we refer to living creatures- but this idea has been increasingly applied to the deceased as well. This doesn’t mean zombies or vampires- having agency in the deceased doesn’t mean that they are undead. These humans, despite being dead, have the ability to cause change in the world. Still confused? Luckily we’ve got a fantastic example. (And yes, there are many definitions of agency and different theories about its application, so if you want to go deeper with this theoretical approach I suggest seeing this 2014 Cambridge Archaeological Journal Issue or picking up a copy of Dobres and Robb 2000.)

In this issue, Tung (2014) examines how individuals in Ancient Peru can continue to be socially and politically active in their world after their death. She defines agency as “the capacity to engage in a willful act, an intentional act wherein the intentions, though perhaps not motives, can be described by the agent, even if there are unintended outcomes to the seemingly intentional actions” (Tung 2015:441). Her sample includes human remains dating to the second half of the decline of the Wari Empire (1270–1390 CE) in the Peruvian Andes. During this period, there was an dramatic increase in violence, warfare and the construction of defensive structures, as well as a severe drought that led to famine and agricultural failure. It was an era of increased social inequality and change in the social and political structures of the region. 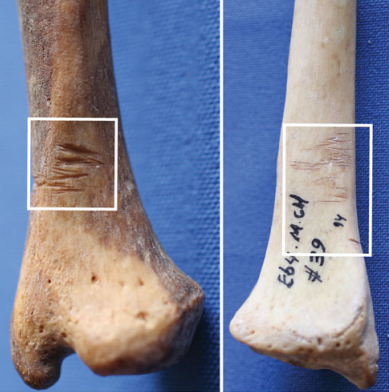 Cut marks on long bones from the site, evidence of dismemberment, via Tung 2015

These conditions led to the massacre and dismemberment of around 240 individuals in the ritual sectors of Vegachayoq Moqo and Monqachayoq, within the former Wari Imperial capital city of Huari. This collection of remains is the sample for Tung’s (2015) study. At the both ritual sites,  there were galleries that entombed the remains of the Wari elite. However, in the post-imperial era, hundreds of bodies were thrown or discarded into a large pit or underground gallery. It is possible that this site was taken over by new conquerors and used to dispose of the fallen enemy, or it may have continued use as an important ritual site. It isn’t known either whether they were foreign or local peoples, but it is obvious that they died in a context of violence. Further- the remains of these individuals had been dismembered prior to being discarded.

The human remains from this site show evidence of peri-mortem and post-morten trauma. Peri-mortem trauma is damage done to the individual around the time of death. In this sample, this includes blows to the head, defensive injuries, and blunt force trauma along the back suggesting that they were killed with clubs or maces. Post-mortem trauma occurs after the individual has died, and in this sample includes sharp force trauma- specifically the use of knives to cut flesh and ligaments in the dead in order to dismember them (remove their limbs or specific body parts from the whole). The dismembering of 240 individuals would have been a massive undertaking and must have had a major effect on the people who were doing the dismembering or watching it occur.

Tung identifies three groups in particular for whom the dismembered remains would have an effect on: 1) the attackers; 2) the victim group; and 3) neighbouring groups. For the attackers, the presence of these dismembered remains was a reminder of the freedom from either real or perceived oppression that they achieved. This may have been an act of resistance or revenge, but either way, the physical presence of the mangled remains of the dead would have supported their cause and reminded them of their victory. For the victims, the presence of the body parts of their family, friends and community members would have acted as a threat and demonstration of violence, increasing their subordination to the attackers and making them easier to manage. Finally, this type of display would have caused change in neighboring communities regarding their perception of the attackers, perhaps making them more subordinate or changing their interactions with them. In other words, while the deaths of these 240 individuals would have caused changed, the persistence of their dismembered remains meant that they had a continued influence on the social and political structures, interactions, and perceptions of the living in this area.

There are many types of agency, and Tung (2015) concludes this article by arguing for the effective agency of these dismembered remains- by being present, they had a continued and persistent effect on the behaviors of the attackers, the victims and surrounding communities. In the process of killing, dismembering and displaying these individuals, the dead changed into objects that could affect change in this society. They were not passive symbols of power- they were active reminders of the actions that occurred. While they may have been mostly dead, their ability to cause change means that in some ways, they were slightly alive.