The Huangsipu site is situated in the junction area of the Qing’an village, Yangshe town and the Tanli village, Tangqiao town, Zhangjiagang. It is about 14 km south away from the Yangzi River and about 3 km away from Zhangjiagang downtown. From 2008 to 2010, two salvage archaeological excavations and coring were carried out at the site. As a result, an important discovery was achieved, revealing that the Huangsipu site was used to be an important market in the south bank of the Yangzi River estuary during the Tang and Song dynasties due to a large number of ceramics, pottery and iron daily wares unearthed from the site, particularly the ceramics which were produced in the various kilns nationwide.

In order to further know the cultural connotation of the Huangsipu site, the joint archaeology team combined with the Nanjing Museum and the Zhangjiagang Museum carried out another salvage excavation at the site during April to December, 2011. The excavation area was in the east district of the site and covered about 3000 square meter. As a result, some important cultural features were found, including house ruins, storehouses, wells, roads, etc. dating to the Tang and Song dynasties. Moreover, a large number of ceramics and a few bronzes, iron daily wares were also unearthed, particularly the ceramics which was produced in various types and kilns. The discovery supplied significant materials for further understanding the characters of the Huangsipu site as a port market and its frequent cultural exchange activities.

The excavation in 2011 was carried out at the west side of the Huangsipu river course, dissecting the river course dating to the Tang dynasty found in 2009. Its result showed that houses ruins, well preserved brick paved roads, parts of drainage, stone plinths and a pile of pottery tiles dating to the Song dynasty and so on were discovered above the abandoned Tang dynasty river course. The pile of pottery tiles were the plate tiles for roofs. They were intensively laid out and arranged in order. Moreover, on the south of the Tang river course, many building foundations dating to the Tang dynasty were found, including long row house ruins with porches, near square house ruins with one bay, rectangle house ruins, etc. These house ruins had foundation trenches, in which lots of broken bricks and tiles were filled in order to consolidate the foundation of the walls. And there was a large circular plinth in the corners of some house ruins. In addition, on the west of these house ruins, a Tang dynasty storehouse was found. The cultural remains are briefly introduced below:

F18 is a long row house with porches, facing south and arranging in east-west. It was combined with at least 5 houses and a south porch, covering 112.5 square meter in all. The 5 houses were basically similar because all of them had foundation trenches and circular column pits. The house with one single room was about 4.5 meters long in east-east and about 5 meters wide in south-north, covering about 22.5 square meters; the porch was about 23 meter long and 2 meters wide. In the inner side of the porch foundation trench, there was a square plinth with round corners on the points corresponding to the corners of the one-bay house ruin and several layers of pure grey yellow earth rammed inside. Moreover, a large number of broken bricks and tiles were found at the top of the house ruins, and some cultural relics, such as many ceramic bowls plate-bottom shards and coins inscribed with “Kaiyuantongbao (开元通宝)”, were discovered. 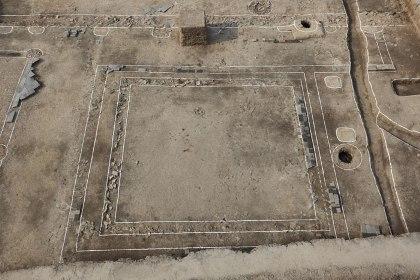 In this excavation, lots of stoves dating to the Tang dynasty were found on the north of the long row houses and five of them have been disclosed. The stoves included circular and oval stove pits. Moreover, the walls of these stoves were made of grey bricks and some hearths were paved with grey bricks too. Among the stoves, Z7 is the most well-preserved and of the largest scale. It is irregular square shaped in plane and about 3.8 meters long in east-west, about 3.1 meters wide in south-north and 1.2 meters deep. Two and three column pits were found on the south and north sides of the stove respectively, but the middle column pit was not found on the south side corresponding to the middle column pit on the north side, which was presumed to be destroyed by an ash trench. The column pits on both sides showed that a kind of shed building should have been built at the top of the stove and it could be called a stove house. Moreover, the stove ruin mainly was combined with double-mouth stove and operation rooms. The walls of the double stoves were paved with bricks and 1.3 meters in diameter. The stove was facing westwards and there were 15 grey bricks erecting at the mouth of the stove. Its hearth was like the bottom of a pot and there were white grey soil, burned soil and plant ashes deposited in the stove pit where celadon bo bowls, celadon bowls and coins inscribed with “Kaiyuantongbao(开元通宝)” were unearthed dating to the Tang dynasty.

This excavation not only discovered many features, but also numerous cultural relics, including ceramics, pottery, iron wares, bronzes, bone artifacts and horn artifacts, etc. Ceramics are predominant in number among them and were made in various kilns.
The discovery of the house ruins dating to the Tang dynasty re-appeared the life at the time of Tang. According to the size of the buildings, F18 with other house ruins were larger in scale and arranged in order, representing the layout in advance and the large-scaled architecture’s feature. On the west side of the row houses dating to the Tang dynasty, a large scaled store house was disclosed and it should be related to the commodities storage and transport. Moreover, the discovery of the numerous wells is probably related to the fresh water supply at the port. In addition, the disclosed stoves on the south side of the Tang river courses showed that population was large and the cultural and trade exchange activities were frequent. With the further excavatio, the feature of the Huangsipu site as an important port market would be more and more obvious.    (Translator: Zhai Shaodong)