Human-sacrifice rituals at an ancient Moche temple in Peru likely featured the killing of war captives from distant valleys, according to an analysis of bones and teeth at the site.

The human remains—mutilated, dismembered, and buried in pits—help explain territorial struggles among the Moche, who ruled Peru's arid coast from around 100 A.D. to 850 A.D. 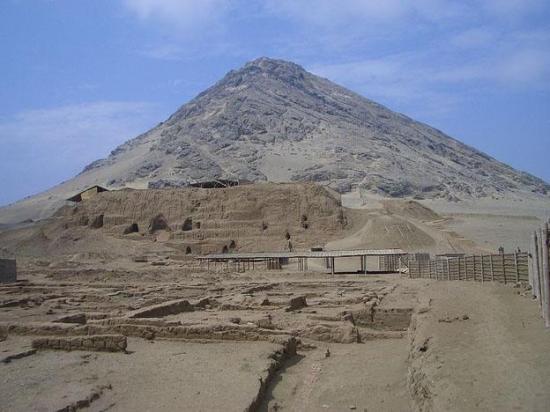 Debate among scholars over Moche human sacrifices has centered on the question of whether they were ritual killings of elites or of war prisoners, says archaeologist John Verano of Tulane University in New Orleans, one of the authors of the report, available online and in an upcoming issue of Journal of Archaeological Science.

"They look like war captives," Verano concludes, pointing to the study's bone chemistry results, which suggest that sacrifice victims came from far away in the late days of the Moche empire.

Among the largest-known Moche ruins is the brick mound site of Huacas de Moche, located near the modern-day city of Trujillo, Peru. The mound consists of three platforms connected by corridors, plazas, and temples.

Roughly 70 sacrifice victims have been found there so far—an indication of frequent human offerings. That alone suggests the slaughter of captured warriors rather than rare killings of elites to appease the gods in religious rituals, Verano says. The victims were killed, displayed, and later swept into pits.

"You don't deny a proper burial, deflesh, mutilate, and turn your elites' bones into trophies as they did [at Huacas de Moche]," says Verano, whose work has been partly supported by National Geographic Society grants. "You don't make a drinking mug out of your elite [ruler's] skull."

Sacrifice ceremonies are depicted in Moche artwork, often showing the killing of bound, naked men. Priests and priestesses are portrayed offering goblets filled with the victims' blood to supernatural beings.

The sacrifice victims' bones were then left for vultures.

Victims From Far Away

The new report is the result of work on the remains of 34 people, some buried in neatly ordered graves and others in burial pits, the latter including young men with their throats slit and bones dismembered.

The chief author of the report, J. Marla Toyne of the University of Central Florida in Orlando, led efforts to analyze oxygen isotopes in the remains of the dead.

The water that people drink leaves specific oxygen traces in bones and teeth, which can help determine where victims lived, both in infancy and in the last decade of their lives. In the case of the Huaca de Moche burials, the male elite—buried in neat graves—were all locals who drank the local river water.

For the past two decades, archaeologists have suspected that some Moche states pursued empire-building along the Andean coast, says Peruvian Ministry of Culture archaeologist Luis Jaime Castillo Butters, who was not part of the study team.

"The Southern Moche, based in the Huacas de Moche, seem to have been the truly expansionist ones," he wrote by email. "Marla Toyne's research proves this with isotopic information."

When Huacas de Moche was first discovered 50 years ago, archaeologists thought that it was the capital of a long-standing Moche empire rather than a city that had expanded its geographic dominance over time.

The new study suggests that Moche centers vied with each other for power and resources, which likely led to warfare. The battles led to the taking of captives, and it seems that captives were slain in sacrifice ceremonies.

Another intriguing result of the bone analysis is that elite women buried at the temples also appear to have largely come from elsewhere.

That points to a "patrilocal" system for the Moche, suggesting that they traded "princess brides" between centers, Verano says. "Not so different from now in some places."

Overall, the findings are updating the view of the enigmatic Moche, who didn't leave behind records as detailed as those of contemporaries such as the Maya of Central America.

"We have to do a lot of careful detective work, still," says Verano, who has been part of excavation work at Huaca de Moches for more than a decade.