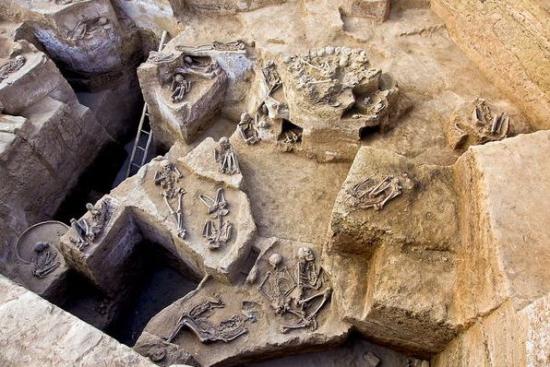 Skeletons lie in various positions in the mass sacrifice pit near the Huaca Las Ventanas pyramid. Photograph courtesy A. Bryce

An apparent ritual mass sacrifice—including decapitations and a royal beer bash—is coming to light near a pre-Inca pyramid in northern Peru, archaeologists say.

Excavations next to the ancient Huaca Las Ventanas pyramid first uncovered bodies in August, and more have been emerging since then from a 50-by-50-foot (15-by-15-meter) pit.

The pyramid is part of the Sicán site, the capital of the Lambayeque people—also known as the Sicán—who ruled Peru's northern coast from about A.D. 900 to 1100.

Perhaps more than a hundred bodies—buried nude and some of them headless—lie in the newfound pit, according to Haagen Klaus, a bioarchaeologist at Utah Valley University in Orem who is studying the finds.

The bodies are almost all adult males, with the exception of two children, each accompanied by what appears to be an adult woman.

Despite the huge mass burial, the Sicán were not warmongers, Klaus stressed. Instead the Sicán culture used an economy based on trade to build an empire that, at its peak around A.D. 1000, spanned thousands of miles across what is now Ecuador and Peru.

All the dead in the newfound pit were likely willing participants from local communities engaged in a ritual that celebrated death so that "new life could emerge in the world," Klaus said in an email to National Geographic News.

"Sicán was holy ground, and only the most sanctified of religious rituals involving ancestors appear to have taken place there," he added. "Mass ritual sacrifice appears to be the most likely interpretation" of the discovery.

"However, it is unlike any other context found before [among the Sicán], as it blurs the lines between burial ritual and sacrifice."

Unlike bodies found at other Sicán sites, there's no pattern to the placement of remains in this pit, said José Pinilla, chief field archaeologist and co-director of the project with Carlos Elera, director of the Sicán National Museum.

"There is a high degree of variation in the position of the bodies, from being dumped in with arms and legs splayed, to being carefully folded and flattened, and being folded in tightly flexed positions," Pinilla said in an email.

For instance, one body was found in a brewery along the eastern edge of the sacrifice pit. The remains had been folded up and placed face down on top of a 4.5-foot-tall (1.3-meter-tall) ceramic jar used to brew and serve the corn-beer chicha, a common drink at funeral feasts throughout the Andes.

The brewery's placement on the edge of the pit suggests the Sicán held a solemn burial feast in which vast quantities of chicha were consumed by the living and offered to the dead.

Some of the bodies in the pit are headless, and at least 20 severed heads were found in a smaller pit within the burial site. However, a direct connection between the headless bodies and the skulls has not yet been established.

"In the laboratory we will soon look for cut marks and other forms of sharp-force trauma that might indicate these were not disturbed by mortuary activity but were actually fresh heads of the recently dead," Utah Valley University's Klaus said.

In addition to the human heads, ceramic heads of the Sicán deity—which typically adorn fine funerary vessels—and sculptural depictions of heads that often decorate chicha cups were found scattered throughout the pit.

"When a ceramic vessel or bottle is broken through an accidental process, the breakage patterns tend to be random. What we see here is evidence of extremely careful, repetitive, and very intentional breakage of these things," Klaus said in a followup telephone interview.

"They are breaking off the depictions of heads of these different animals or people or the Sicán god itself. And the parallel layer, of course, is we have a number of people who appear to have been decapitated as offerings as well."

Based on the art styles on the ceramic vessels, the team thinks the bodies were placed in the pit over a series of three events that occurred between A.D. 900 and 1100.

The first two events involved the burial of the bodies. The third was a reopening of the pit during which bones from skeletons "were altered, removed, rearranged, or otherwise manipulated," project co-director Pinilla said.

"This is when the 'skull pit' and other piles of carefully selected long bones such as femurs and humeri were placed throughout the area."

The archaeologists suspect the mass sacrifice was part of an elaborate ritual offering to a Sicán lord buried in a yet to be discovered tomb that may lie beneath the pit.

"At the deepest points of a few of our deepest test excavations, we've found an exceptionally hard, man-made layer of clay. This is very similar to the types of clay seals the ancient Sicán people placed above the mouth of tombs of some deceased Sicán lords," Elera, the museum director, said in an email.

In addition, he noted, a 1960s account from raiders of a smaller pyramid to the east of Huaca Las Ventanas "reported ripping out many skeletons ... before indeed reaching the tomb they sought to loot."

What's more, research led by Southern Illinois University archaeologist Izumi Shimada has uncovered several elaborate tombs at the Sicán site, said John Verano, a physical anthropologist at Tulane University in New Orleans who is familiar with the work but not part of either team.

According to Verano, those previously found tombs were full of precious metals and other exotic goods and were accompanied by human sacrifices—though not on the scale of this recent discovery.

"We are only guessing now," Verano said, "but if this [new discovery] is an offering made to a tomb, this is probably a very important individual, and the killing of these people is something new and perhaps symbolic of the power of this particular person."