Extraordinary how times change, particularly if you are an archaeologist.

A century ago when Sir Arthur Evans (1851-1941) was knighted for his services to archaeology at Knossos in Crete, it was perfectly acceptable for a dashing and rich individual like him, hugely knowledgeable but largely self-taught in his chosen profession, to follow a hunch and dig about more or less where he pleased. 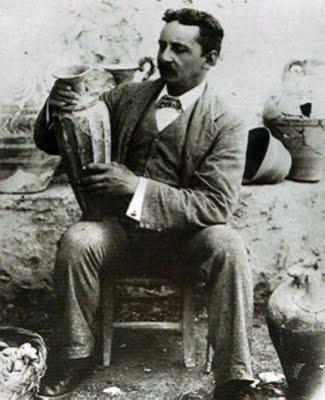 Now, of course, excavations are carried out differently, with practically every shovelful of earth being sifted and subjected to objective peer review.

Sir Arthur was the son of Sir John Evans, an amateur expert on ancient British coins, and stone and bronze implements, who had made his fortune as the head of the paper manufacturers John Dickinson, of Nash Mills, in Hertfordshire.

Evans went up to Brasenose College, Oxford, from Harrow to read Modern History in 1874. After several adventurous years travelling in Europe — notably in Bosnia Herzegovina, where his sketching got him arrested as a spy — he returned to Oxford in 1884 to become Keeper of the Ashmolean Museum. By then, he had become an authority on the already crumbling Ottoman Empire, of which Crete was then a part — and his chief interest was Cretan seal stones, or gems, depicting in miniature aspects of life in Crete from the 27th century BC to the 15th century BC — the period he called the Minoan civilisation.

Now the Ashmolean still has the best collection of seal stones outside Greece — but amazing as it may now seem — he prepared the way for excavating at Knossos by buying the site; so the dig became an essentially private enterprise happening on his own land. He was anxious to pin down the dawn of European civilisation but modern critics have two important complaints about his methods: first, he dug straight through strata containing remains of much later Roman buildings in order to reach the period in which he was interested; and he reconstructed a certain amount of what he called the ‘Palace of Knossos’ in such a way that it is now sometimes difficult to see what was actually revealed (rather than built or painted by his team). 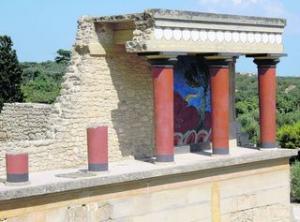 Evans remained Keeper of the Museum until 1908. He therefore oversaw the building of the extension to the galleries in Beaumont Street in 1894, most of which was demolished during the recent renovations there.

He bought Youlbury on Boars Hill in 1893 and lived there from 1894 until his death. The house, with its Minoan-style decorations, has sadly burned down, but much of the estate is now a Scouts Activities Centre, since he left land there to the Scout movement. In conjunction with the Oxford Preservation Trust the rest of Youlbury later became a ‘private open space’.

He evidently had a yearning to play his part in the modern world as well as in the ancient one. In 1909, he put himself forward as the Liberal candidate for Parliament for Oxford University but was persuaded to withdraw by Lord Lansdowne, Unionist leader in the Lords. During the Great Depression, he had Jarn Mound at Youlbury, and its surrounding wild garden, built in order to give work to local people.

Lewis Evans (1853-1930), the younger brother of Sir Arthur, was instrumental in establishing the Oxford Museum of Science in Broad Street. The chairman of the family paper-making firm, he amassed a collection of early scientific instruments; and this collection, including early sundials, astrolabes and mathematical instruments, he gave to Oxford University in 1924.

In that year, the upper floor of that lovely 17th-century building was assigned to the Lewis Evans Collection — and Mr Evans himself was given an honorary Doctor of Science degree the following year.

Now the museum occupies the whole building. It was established by statute in 1935, thanks largely to Mr Evans and his friend Robert Gunther, the author of the 14-volume Early Science in Oxford — in which, incidentally, he complained that the university paid too little attention to science.