The mystery of how early humans survived the Ice Age while Neanderthals disappeared into evolutionary oblivion may lie in their choice of outerwear.

A new study suggests that our ancestors had invented cosy fur-lined coats, similar to modern Parkas, while Neanderthals were left shivering in draughty capes.

Archaeologists have long argued about why humans are the only surviving hominid even though other species of ‘homo’ had similar-sized brains and were physically stronger.

Neanderthals died out around 40,000 years ago, and some experts claim they were out-competed by homo sapiens who had learned astonishing new levels of cooperation and communication which allowed them to pool resources.

But now scientists in Scotland and Canada have found evidence that Neanderthals were not equipped with the cold-weather clothing needed to survive the glacial Ice Age.

Early modern humans, left, were not as robust as Neanderthals, right, but had better technology  CREDIT: NATURAL HISTORY MUSEUM

Studies of early human campsites revealed the bones of furry creatures, like rabbits, foxes and mink which researchers believe were used to trim their garments to stay warm.  56 human sites were also found to contain wolverine, the fur of which is still used by Arctic peoples for ruffs on their Parkas. None were found at Neanderthal sites.

“Wolverine fur is the best natural fur to use as a Parka ruff. It provides excellent protection from the wind, sheds hoarfrost particularly well and is extremely durable,” wrote lead author Mark Collard, Professor of Archaeology at the University of Aberdeen and Canada Research Chair at the Simon Fraser University in British Columbia, Canada.

“The impact of differences in Neanderthal and early modern human clothing could have been substantial.

“As is well known, prolonged exposure to the cold in the absence of adequate clothing can lead to frostbite and hypothermia, and eventually death.

“At the extreme, then, differences in clothing could have had an impact on the health and perhaps even the survivorship of Neanderthals compared to early modern humans.”

Evidence of bone needles and pelt scrapers have also been found at human sites. In contrast Neanderthals show no evidence of knowing how to make closely fitting garments and are thought to have simply draped themselves with animal skins.  Some archaeologists believe that Neanderthals may have worn nothing at all.

Unsuitable clothing would not just have made life uncomfortable for Neanderthals but would have stopped them foraging further north and limited their daily ‘time window’ of hunting and gathering to the warmest part of the day.

Studies of modern hunter-gatherers also suggest that ‘ambush’ hunting practices are impaired by poor clothing because it is too chilly to lie in wait for long periods of time until prey arrives.

Insufficient foraging could also have lowered their energy, leading to a lower birth rate, and increasingly small communities which were eventually unsustainable.

“I think this is a really interesting bit of work," said Professor Chris Stringer, research leader in human origins at the Natural History Museum in London.

“If you look at the skeletons the Cro-Magnons from 30,000 years ago, they had physiques like they had just walked out of north east Africa.  To achieve that they must have had well-fitting clothes to keep warm in colder climates and the technology to make them.

“It’s not going to be the whole story about how humans replaced Neanderthals but their ability to keep warm could have certainly given them the edge. Keeping children warm particularly is likely to have led to many more surviving childhood which would have improved population size.”

The researchers suggest that Neanderthals may not have been intelligent enough to produce cold weather clothing, or did not have the necessary cultural traditions.

“There is general agreement that as early modern humans moved into glacial Europe they would have adopted highly insulative specialised cold weather clothing, involving multiple fitted garments made from well-tanned pliable hides,” conclude the authors in a paper published in the Journal of Anthropological Archaeology.

“There is reason to believe that the difference in clothing  helped early modern human successfully compete with Neanderthals for territory and resources.” 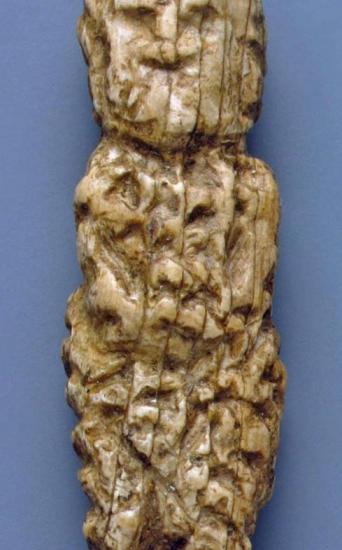