How human ancestors got a grip

An example of a human precision grip, grasping an Australopithecus africanus first metacarpal (StW 418) of the thumb (3-2 million years old). Credit: T.L. Kivell & M. Skinner
New research suggests pre-Homo human ancestral species, such as Australopithecus africanus, used human-like hand postures much earlier than was previously thought.
Anthropologists from the University of Kent, working with researchers from University College London, the Max Planck Institute for Evolutionary Anthropology in Leipzig (Germany) and the Vienna University of Technology (Austria), have produced the first research findings to support archaeological evidence for stone tool use among fossil australopiths 3-2 million years ago.

The distinctly human ability for forceful precision (e.g. when turning a key) and power "squeeze" gripping (e.g. when using a hammer) is linked to two key evolutionary transitions in hand use: a reduction in arboreal climbing and the manufacture and use of stone tools. However, it is unclear when these locomotory and manipulative transitions occurred.

Dr Matthew Skinner, Senior Lecturer in Biological Anthropology and Dr Tracy Kivell, Reader in Biological Anthropology, both of Kent's School of Anthropology and Conservation, used new techniques to reveal how fossil species were using their hands by examining the internal spongey structure of bone called trabeculae. Trabecular bone remodels quickly during life and can reflect the actual behaviour of individuals in their lifetime.

The researchers first examined the trabeculae of hand bones of humans and chimpanzees. They found clear differences between humans, who have a unique ability for forceful precision gripping between thumb and fingers, and chimpanzees, who cannot adopt human-like postures. This unique human pattern is present in known non-arboreal and stone tool-making fossil human species, such as Neanderthals. 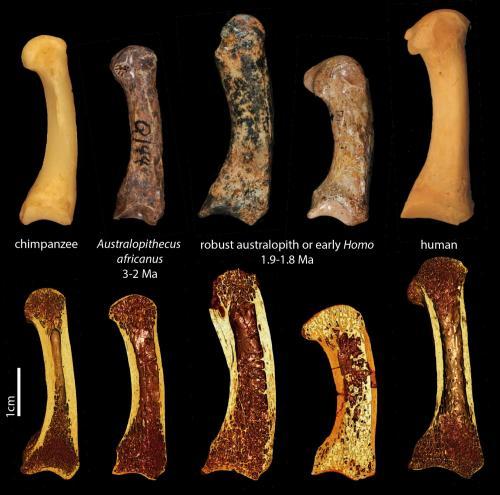 Top row: First metacarpals of the thumb in (from left to right) a chimpanzee, fossil hominins Australopithecus africanus (StW 418) and two specimens belonging to either a robust australopiths or early Homo (SKX 5020 and SK 84), and a human. The bottom row shows 3D renderings from the microCT scans of the same specimens, showing a cross-section of the trabecular structure inside. Ma, million years ago. Credit: T.L. Kivell
The research, titled Human-like hand use in Australopithecus africanus, shows that Australopithecus africanus, a 3-2 million-year-old species from South Africa traditionally considered not to have engaged in habitual tool manufacture, has a human-like trabecular bone pattern in the bones of the thumb and palm (the metacarpals) consistent with forceful opposition of the thumb and fingers typically adopted during tool use.

These results support previously published archaeological evidence for stone tool use in australopiths and provide skeletal evidence that our early ancestors used human-like hand postures much earlier and more frequently than previously considered.

Sagittal midline cross sections of the first metacarpal in Pan, recent H. sapiens, and fossil hominins. Recent and early H. sapiens demonstrate a palmar concentration of trabecular bone in the proximal base of the Mc1 consistent with forceful opposition of the thumb, which is distinct from the more homogeneous distribution of trabecular bone in Pan. A. africanus, Swartkrans specimen SK 84, and H. neanderthalensis also demonstrate the H. sapiens pattern, suggesting similar loading and use of the thumb. Swartkrans specimen SKX 5020 has a more homogeneous distribution of trabecular bone in the Mc1 base that is more similar to Pan. The distal heads of SKX 5020 and Amud 1, as well as the proximal base and palmar shaft of Qafzeh 9, are not fully preserved. Trabecular bone volume fraction is scaled to 0 to 45%. Credit: M.M. Skinner et al., Science, VOL347, ISSUE 6220 (2015) 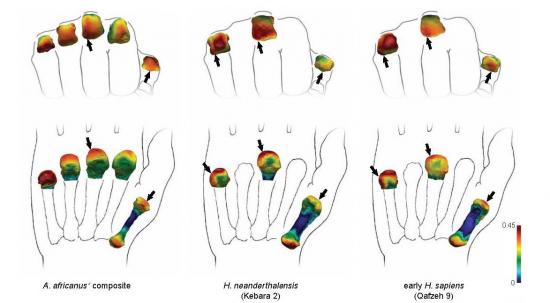