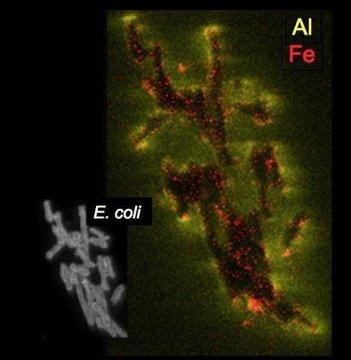 Since prehistoric times, clays have been used by people for medicinal purposes. Whether by eating it, soaking in a mud bath, or using it to stop bleeding from wounds, clay has long been part of keeping humans healthy. Certain clays have also been found with germ-killing abilities, but how these work has remained unclear.

A new discovery by Arizona State University scientists shows exactly how two specific metallic elements in the right kinds of clay can kill troublesome bacteria that infect humans and animals.

"We think of this mechanism like the Trojan horse attack in ancient Greece," said Lynda Williams, a clay-mineral scientist at ASU's School of Earth and Space Exploration (SESE). "Two elements in the clay work in tandem to kill bacteria."

She explained, "One metallic element -- chemically reduced iron, which in small amounts is required by a bacterial cell for nutrition -- tricks the cell into opening its wall. Then another element -- aluminum -- props the cell wall open, allowing a flood of iron to enter the cell. This overabundance of iron then poisons the cell, killing it as the reduced iron becomes oxidized."

"It's like putting a nail in the coffin of the dead bacteria," said Keith Morrison, Williams' former doctoral student, who is now at Lawrence Livermore National Laboratory.

Morrison is the lead author of the paper reporting the discovery, which was published Jan. 8 in Nature Scientific Reports. Rajeev Misra, a microbiology professor in ASU's School of Life Sciences (SOLS) is the third author of the paper. Morrison's work in Misra's laboratory gave insights into the mechanism by which clays work to kill bacteria. Both SESE and SOLS are units in the university's College of Liberal Arts and Sciences.

A critical part of the investigation involved the use of ASU's NanoSIMS, which is part of the National Science Foundation-supported Secondary Ion Mass Spectrometry Facility. The study also benefited from a variety of electron microscopes and X-ray equipment in the LeRoy Eyring Center for Solid State Science.

A chance discovery of a medicinal clay from Europe caught Williams' attention and put her on the track. A French philanthropist with clinical experience in Africa told her about a particular green-hued clay found near the philanthropist's childhood home in France. The philanthropist, Line Brunet de Courssou, had taken samples of the clay to Africa, where she documented its cure for Buruli ulcer, a flesh-eating skin disease, in patients in the African country of Cote d'Ivoire (Ivory Coast).

Williams attempted to locate the site of the green clay deposit, which was in the French Massif Central region. When the search proved unsuccessful, she began systematically testing clays sold online as "healing clays."

After testing dozens of samples, Williams and her team identified a blue-colored clay from the Oregon Cascades that proved to be highly antibacterial. The research reported in the paper shows that it works against a broad spectrum of human pathogens, including antibiotic-resistant strains such as methicillin-resistant Staphylococcus aureus (MRSA).

The colors of the clays reflect their origins, Williams said. The greens and blues of antibacterial clays come from having a high content of chemically reduced iron (Fe2+), as opposed to oxidized iron (Fe3+), which gives the familiar red color of rust (Fe-oxide), often associated with many clays. Reduced clays are common in many parts of the world, typically forming in volcanic ash layers as rocks become altered by water that is oxygen-deprived and hydrogen-rich.

"The novelty of this research is two-fold: identifying the natural environment of the formation of clays toxic to bacteria, and how the chemistry of these clays attacks and destroys the bacteria," said Enriqueta Barrera, a program director in the National Science Foundation's Division of Earth Sciences, which funded the research.

Because blue and green clays are found abundantly in nature, Williams said, this discovery of how their antibacterial action works should lead to alternative ways of treating infections and diseases that are persistent and hard to heal with antibiotics.

Williams said, "Discovery of how natural clays kill human pathogens may lead to a new economic use of such clays and also to new drug designs."