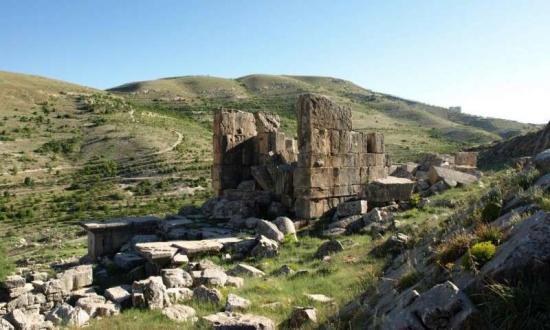 Standing remains of the large 2nd century CE Graeco-Roman temple at Hosn Niha, unchanged since first recorded in the early 19th century CE. The walls still stand to a height of 10 metres. Credit: University of Leicester/ American University of Beirut
An international archaeological team is investigating an historic site devastated by conflict in Lebanon.
They have demonstrated it is possible to obtain original and important information from heritage sites that have been devastated by conflict.

Working at the Graeco-Roman temple and village site of Hosn Niha, high in the central Biqa' Valley of Lebanon, the team led by Dr Paul Newson (Department of History and Archaeology, American University of Beirut) and Dr Ruth Young (School of Archaeology and Ancient History, University of Leicester) have described the value of exploring conflict damaged sites in the leading archaeological journal Antiquity.

Dr Newson said: "Shocking recent footage showing apparent damage to world heritage and archaeological sites at Hatra and Nimrud in Iraq include scenes of the bulldozing of irreplaceable buildings. Aerial photographs of living ancient cities such as Homs and Aleppo in Syria taken before the war have been compared to images from the last few months, and the extent of damage to houses, mosques, and heritage structures is brutal and widespread. 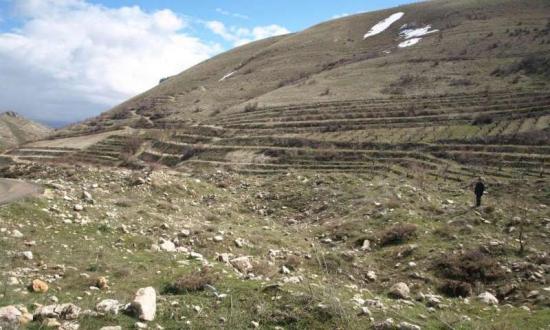 Part of the central area of the Graeco-Roman settlement at Hosn Niha showing extensive damage from bulldozing and other illegal excavation activities. Credit: University of Leicester/ American University of Beirut
"Of course the human cost in any conflict is the first and highest priority; however, archaeology and heritage are extremely vulnerable to attack and damage during conflict and conflict continues to inflict damage on numerous sites, both large and small, around the world today."

"Our research at the Graeco-Roman temple and village site of Hosn Niha in Lebanon has shown that with the right methods and questions, it is possible to obtain a great deal of original and important information from sites that have suffered badly through conflict.

"Using a range of up-to-date surface survey methods we were able to answer some important questions about the site. The first of these was an accurate assessment of site damage, what had been done and where, and the effects of various actions, be it bulldozing or clandestine looting of the site. Through this exercise, we learned that bulldozing and other damage actions had effectively erased the heart of the settlement, but significantly sized sections of settlement beyond remained quite well preserved. From recording and collecting surface finds from across the settlement area as a whole we were able to begin to understand both the morphology and development history of the settlement."

The authors suggest the settlement was firmly established by the 1st century CE with a dense core area and more dispersed courtyard dwellings on the periphery. By the early Islamic period the settlement appears less robust and permanent occupation may have ended for a time. Surprisingly, they also recovered some evidence for an early medieval re-occupation of the site, perhaps a fortified farmhouse. They acknowledge the initial results are preliminary and that more research and analysis of the results is on-going.

Hosn Niha, along with many other sites in Lebanon was severely damaged as a consequence of decades of civil war and the associated unruliness and accelerated looting that went with this.

The authors state: "Sites that have been badly damaged by various causes may be disregarded by professionals who consider that their archaeological or heritage potential has been too badly affected to warrant any investigation. Instead, as demonstrated by the Hosn Niha project, the opposite should become automatic: archaeologists should view conflict-damaged sites as opportunities to gain information and explore sites and regions with new agendas.

"Conflict is impacting the lives of many millions of people, and the archaeology and heritage of many nations. All conflict-damaged archaeology and heritage can play a vital role as resources to help re-build damaged communities and offer hope of employment and reintegration to those impacted by war. Being able to offer ways of thinking of how to deal with damaged sites, gain as much information from them, and consider them a valuable resource rather than an inevitable casualty of war is critical to moving forward, and regaining control over land and identity."