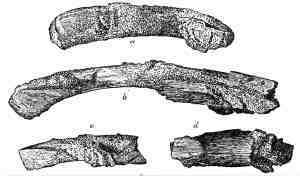 Iron is the most useful of all metals, but humans took a long time to learn how to use it. Even the Roman poet Lucretius understood that the Iron Age was the culmination of a long sequence of technological developments that began during the primal Stone Age.

The ancient Hittites of Turkey were the first to smelt iron, around 1500 B.C. In Egypt, the earliest iron smelting dates to around 700 B.C. That’s why it came as a considerable surprise when archaeologists recovered a handful of iron beads from the Gerzeh cemetery near Cairo dating to around 3500 B.C. Where did the iron come from? Could Egyptians have developed iron smelting that much earlier? It surely didn't just fall from the sky. Or did it?

Diane Johnson, a professor at the Open University in Milton Keynes in the United Kingdom, and several colleagues have solved the puzzle. The team reports in the journal Meteoritics & Planetary Science that the Gerzeh iron beads did, indeed, fall from the sky. These beads are made from meteoric iron, which is so pure it doesn’t need to be smelted.

Johnson and her coauthors point out that the Gerzeh “iron seems to be used exclusively for high-status funerary goods, implying that a particular importance was placed upon it.”

There was no iron smelting in North America until around A.D. 1000, when Vikings brought the technology with them to the briefly occupied site of L'Anse aux Meadows in Newfoundland. It didn’t catch on among the indigenous population and wasn’t reintroduced until after A.D. 1492. But just as in Egypt, iron artifacts are found at much earlier sites, and the explanation is the same.

In 1961, Olaf Prufer, an archaeologist with the Case Institute of Technology, published a review of “prehistoric Hopewell meteorite collecting” in the Ohio Journal of Science. Prufer listed a variety of iron ornaments and tools that had been found at Ohio Hopewell mounds dating from as early as 100 B.C.

These included cylindrical beads of meteoric iron and ear spools made entirely of iron as well as copper ear spools plated with iron. There was even a human arm bone “banded and partly covered with meteoric-iron sheeting.”

Prufer speculated that “Hopewellians at one time witnessed a meteoric fall, which started them off on a supernaturally charged search” for more of this magical material.

Chemical analyses of the Hopewell iron later determined that it originated from the Brenham, Kan., meteorite field. Scientists estimate that this meteorite fell to Earth 20,000 years ago, when no Hopewellian would have been there to see it.

Prufer acknowledged that “the usage and treatment of meteoric iron by the Hopewellians is in no way different from that of other metals,” so it’s likely they had no idea this amazing metal had fallen from the sky.

If only we could know the Hopewellian word for iron.