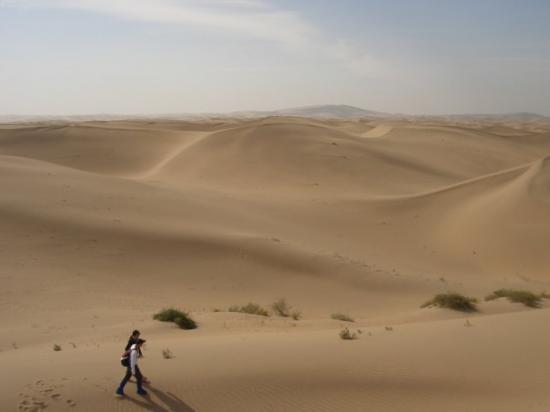 The Hongshan people could have left their civilisation in Inner Mongolia when the rivers began to dry up 6,000 years ago and travelled to the Yellow River to begin again(pfctdayelise, Wikimedia Commons)

Archaeologists from the Institute of Geochemistry Chinese Academy of Sciences believe the mysterious Neolithic Hongshan culture should be credited as the source of Chinese civilisation, which would make the culture 2,400 years older than previously thought.

The cradle of Chinese civilisation is believed to have centred around the Yellow River valley and the first dynasty of China was the Xia dynasty (2070-1600 BC), as described in ancient historical texts such as Records Of The Grand Historian (a Han dynasty history book published around circa 109 BC).

The Hongshan culture predates the Xia dynasty by 2,400 years but very little is known about it or its demise, as there was still no written system in China until 1300 BC.

Archaeological remains from Hongshan have been found in north-eastern China in an area stretching from Inner Mongolia to Liaoning, which is miles away from the river, so it has always been thought theculture was a self-contained tribe unrelated to the founding of Chinese civilisation.

How far did Hongshan stretch across China?

Neolithic Hongshan artifacts (from left): A jade dragon, a jade plaque and jade jewellery in the shape of a mask(Wheielapn, Gary Lee Todd and Yu Er Fu, all Wikimedia Commons)

In a bid to learn more about this lost civilisation, the researchers decided to study sediment and desert land samples taken from Hunshandake, an area in Inner Mongolia that is part of China's desert belt.

Their research, entitled "Groundwater sapping as the cause of irreversible desertification of Hunshandake Sandy Lands, Inner Mongolia, northern China" is published in the journal Proceedings of the National Academy of Sciences (PNAS).

Hunshandake is about 300km (185 miles) away from Chifeng Shi (north of Beijing), where beautiful, sophisticated pottery, clay figurines and jade artefacts from the Hongshan period have been found in tombs and ceremonial sites.

Nevertheless, the archaeologists discovered more evidence of stone artefacts and pottery, which suggests the desert area could have held quite a large population of people.

The researchers also analysed patterns and depressions in the sand dunes, which gave them information relating any environmental changes in the area over the past 10,000 years.

Could they have founded the Xia dynasty?

They discovered that between 5,000 to 9,000 years ago, Hunshandake and its surroundings were not deserts but had lakes, rivers and plentiful vegetation.

So rather than being a nomadic tribe, the researchers now believe the Hongshan people may have had to leave their homes and travel roughly 1,900km down to the Yellow River to start a new life.

That would explain why their civilisation seemed to disappear as its people could have started a newcivilisation that would become the Xia Dynasty.

"For the first time to our knowledge we present a case of desertification mainly triggered by changes associated with climate change," explained the researchers.

"Our research on the interactions in the Hunshandake suggests Chinese civilisation may be rooted in the marginal areas in the north, rather than in the middle reaches of the Yellow River."