Homo floresiensis : Saga of ‘the Hobbit’ highlights a science in crisis

There’s an even more troubling aspect of the field that underpins debates surrounding the Hobbit. One that passes largely unseen to the outsider.

Many anthropologists cling to out-dated ideas about evolution, including models developed in the 1930s and 1940s by the pioneers of the so-called “Modern Synthesis” like Theodosius Dobzansky, George Gaylard Simpson and Ernst Mayr.

These mid-20th century giants of biology are still touted as the final authorities on evolution by many palaeoanthropologists.

While there’s no doubt their contribution to the history of evolutionary biology was critical, many of their ideas have been challenged or found wanting over the last fifty years or more.

These anthropologists also attack anyone who tries to bring the discipline’s foundation in-line with 21st century biology as “anti-evolutionary”, all the while clinging to disproved or at least seriously out-dated ideas.

Dobzhansky’s famous quote – “nothing makes sense in biology except in the light of evolution” – has an ongoing relevance here.

Surely there are two points to his comment? First, the obvious general point about evolution as a broad explanatory model, and the second, more subtle one, about ideas making sense in light of contemporary thinking about evolution, as his was when he uttered these words.

A major debate in evolutionary biology circles today is whether the mid-20th century modern synthesis needs to be radically updated. And a consensus is emerging that it’s time for change, or an “extended synthesis".

It’s not that natural selection or common descent are redundant, rather that our understanding of how evolution works and how genes and environmental influences interact to build bodies and behaviours have gone a long way in that time.

Evolutionary theory needs to be updated to reflect the remarkable progress and new ideas and mechanisms revealed in the last five decades or more.

Why the Hobbit matters so much

The new research published by Caley Orr and co-workers in Journal of Human Evolution presents a detailed study of wrist bones from a second individual using the latest modelling and statistical techniques and detailed interpretations of wrist function. 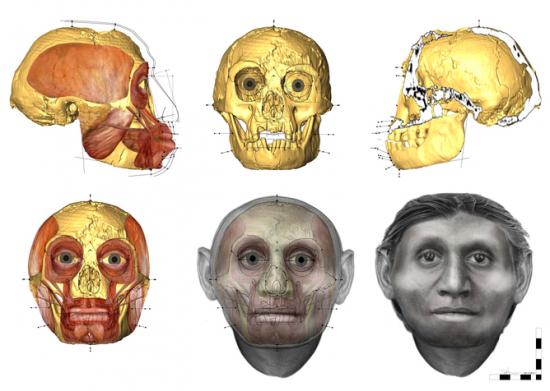 Forensic facial reconstructions of the Hobbit. University of Wollongong

The authors contend their work “supports H. floresiensis as a valid taxon and refutes the hypothesis that these specimens represent modern humans with some kind of pathology or growth disturbance” and that the Hobbit is of a very ancient evolutionary lineage predating the emergence of our own species.

Resolving the status of Homo floresiensis is part of the key to palaeoanthropology remaining relevant and surviving the radical revisions accompanying the extended synthesis during the 21st century.

Many researchers who oppose the Hobbit cling to a modern synthesis view of the world in which there have existed very few species, evolving slowly, perhaps even within a single line from the ancestors with chimpanzees to us today.

With such a mindset, the very notion of something like the Hobbit is simply unthinkable.

But, such a view cannot be sustained in view of the remarkable developments in evolutionary biology and many fossil discoveries over the last half-century.

Homo floresiensis must be seen for what it is and those who would attempt to censor debate or argue for moratoriums on naming new species in the face of obvious diversity in our evolution need to be exposed for the reactionaries they truly are.

If they have their way, palaeoanthropology will die a scientific death, and they will have blood on their hands.